On Sunday afternoon before the weekly crew arrived, some of the long-term volunteers were able to meet the owners of house 4 and give them a peek inside at the progress of the house. They were excited to see the progress and the kids had many questions.

This week we had a group from the Kalispell, MT area including Jeryl Hollinger, Pete and Doe Carroll, TS Laurens, Menno and Pat Troyer, Tim Stutzman, and Rob Schrock. We also had three ladies from the Portland area: Joanne Barta, Vicky Kenyon, and Linda Rush.

We were able to work on all four of the houses this week. In house 1, the drywall mudding continued. House 2 the mudding was finished and they were able to start on painting the interior. One crew made the trip up the mountain to house 3 all week to work on plumbing and electrical. They also had the chance to chat with the home owners and even eat lunch with them a couple of days. The crew working on house 4 started hanging the first of the drywall on Monday and they nearly had it completed by the end of the week.

Wednesday evening at dinner we had the honor of hosting one of the first people in the area to have a house built by the Okanogan County Long Term Recovery Group. He came to eat dinner with us and shared his story. He was so grateful for not only the house that was built for him but the love and compassion shown by those that built it. He said that meeting all of the volunteers and seeing their witness made him want to be more like them. It changed the bitter and hopeless person he was into the better, more loving and joyful person he is today. 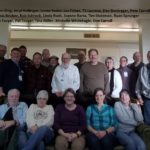