This week we were blessed with a large group of volunteers. The first group included Todd Haworth, Tracy Haworth, Paul Haworth, Wayne Brown, Jim Eby, Kevin Froese, and Jerry Moody. They came from Washington, Tennessee, and North Carolina. The second group included Rondre Weaver, Kyle Martin, and Kendall Copenhaver from Pennsylvania. We also had Andy and Joyce Royce from Seattle, Rich Enns here for a second week in a row, and Dan Bontrager.

The first couple days of the week were spent hanging drywall in houses 1 & 2 and insulating HVAC and crawlspace in houses 1, 2, & 4. The plumbing on house 4 was finished and passed inspection. Once the drywall was hung in houses 1 & 2, insulation was blown into the ceiling and mudding was started on the drywall. Thursday and Friday one crew started on fascia board in preparation for installing the metal roofing.

Joyce was gracious enough to help Tina in the kitchen as the group was so large and we are currently without an assistant cook. Many cookies were made and much good food was prepared.

The weather has been warmer the last several days which has led to much melting of snow and increased muddiness on the job sites. In some cases, the melt is good, ie. warmer temperatures are usually easier to work in and it will allow us to put on the metal roofs soon. For one crew, however, it added an extra layer of challenge when leaving the job site in the large van which required the crew to push the van in order to get it out of the driveway and back onto the road.

This has been a great week with a wonderful group of volunteers that work hard but also know how to have a good time and enjoy spending time with friends and family. 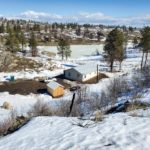 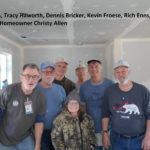 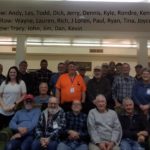