Four of the February long-term team have completed a month of service. Rollie, Josie, Leo and Mim are all returning home this weekend.  Tina, Ryan and Les will continue on through the month of March. Lauren King arrived to replace Josie as office manager. J. Loren Yoder will serve as the new project director in place of Rollie; Dennis Bricker and John Stutzman will join the March long-term team as additional crew leaders.

It was a blessing to have the Dorsing family from Washington state as volunteers this week. Les Dorsing, Curt Dorsing, Scott Dorsing, Kevin (project manager for the Washington projects and vice chair for MDS region 4) and Wanda Dorsing, Trevor Dorsing, Trenton Dorsing, Kelcie (Dorsing)       , along with family friends, Jose Ramirez and Kevin Ramirez comprised a large portion of the group. Riley Bauman and Patricia Weber from Ontario, Canada, Rich Enns from Iowa and Danny Dowers, a local resident, completed this week’s volunteer group.

These volunteers bravely installed siding on houses #3 and #4 in spite of the wind and cold temperatures. They wrapped insulation around HVAC pipes, chopped wood for homeowners at house #3, installed electrical wiring and prepared for drywalling.

We were excited that the electrical inspector arrived Tuesday morning. He was pleased with the quality of work and passed the inspection on both houses #1 and #2. By the end of the week, all four houses were completely sided and had electrical wiring installed. The HVAC is insulated on two of the houses and partially completed on house #4. When one of the long-term volunteers was asked what the highlight of the week was, he responded, “The sun came up every day! Even though it was cold, we did not have one dreary day!”

Submitted by Josie Swartzentruber
For the Okanogan Team 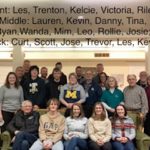