We are enjoying warm Florida weather at last!  It has been in the 80’s most of the week, and we love it!  This week we have had the closing of a job, transition of volunteers, and much meaningful work accomplished toward returning clients to full use of their homes.  One lady asked, “Do you know how good it is to wash dishes at my kitchen sink?”   Many of the homes we are working in are occupied, but they do not have functioning bathrooms or work space in their kitchens.  What joy to see a homeowner’s transition from hopelessness to hope!

Job #6 – This week members of Ray’s team did the last painting and final cleanup on this site.  A house blessing was held on Thursday.  Another home restored!

Job #7 –Fred’s team continued work on this home for a mother and six children.  They have sanded and painted, installed flooring, hung doors, trimmed windows, and worked on electrical issues.

Job #8 – Work was begun at this site on Tuesday, by members of both teams.  They removed existing flooring, patched and repaired the subfloor and began installing new flooring in the living room.

Job #9 – Ray’s team began work at this site on Tuesday.  They hung drywall and began painting.

Job #10 – Ray’s team worked here on Monday, rebuilding the kitchen floor and worked on the ceiling and deck.

Thursday evening the team met for a meal together to say farewell to Mark and Martha, Rod and Kathy and Jim and Naomi.  They all have been a great asset to our team and will be missed.  The ham for our meal was smoked by Steve and Pam – very delicious.  On Friday evening, we had an impromptu carry-in meal with Steve smoking venison that a client had given us.  It’s amazing how quickly a feast can be pulled together.  Paul and Sarah from Maryland, and Peter and Loretta from New York had arrived to begin their service term and joined us for the meal.

By Sunday evening, our group had grown to 21, with the addition of Trish from Colorado, Ed and Sherry from Kansas and Andy and Maureen from Ohio.  Following orientation, the entire team met for banana splits and a time of getting acquainted.  We are off to a good start for the month of March!

Submitted by Ruth for the Entire Team 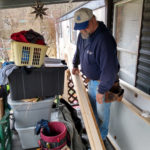 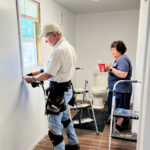 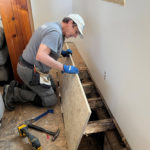 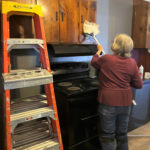 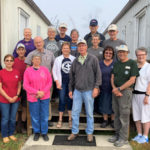 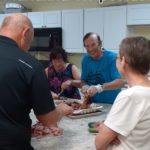 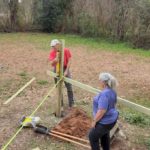 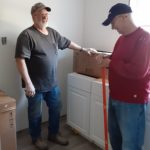 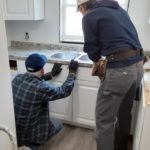 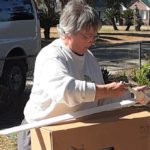