On July 24 we welcomed a group of fifteen from the Pond Bank Community Church in Chambersburg, Pennsylvania.

The group jumped into the work at the campsite with much enthusiasm and energy. They are the first group that gets to see the accomplishments of all four of the previous groups.

Those of us who have been here the entire five weeks could clearly see the results of the efforts of the prior groups. Places where wood chips had been spread two weeks ago to add nutrients to the soil and also keep the soil from washing away in the rain are now covered in beautiful wildflowers. There was much jubilation when baby lodgepole pines were discovered throughout the campgrounds. The group spent time planting trees, digging a ditch to run the new sprinkler system, cutting stumps and hauling them and slash to burn teepees, and watering and tying ribbons around the new trees. Green flags were staked next to the baby lodgepole pines so they would not get trampled during the continuing work at the camp. Some more chips were spread at Mr. Randy’s homesite and trees that were planted a couple weeks ago at the historical cemetery were watered. By the end of the week nearly 400 trees were planted. They were rained out the final day and had to quit working at 2:00. That didn’t stop them from enjoying jumping into the Colorado River that runs through the camp.

Overall, the Summer Youth Project went well. The camp caretakers commented numerous times that they had never seen such hardworking young people. The work that was accomplished far exceeded the expectations of the camp caretakers. 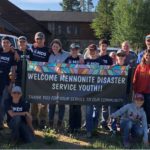 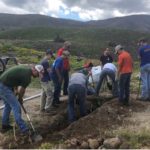 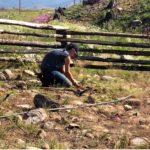 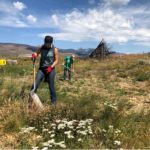