On July 10 we welcomed a group of 14 from the Mifflinburg area of Pennsylvania. The group was made up of 12 men and two women. They arrived with friendly smiles, and a strong work ethic, ready to work. This group had arrived in Colorado several days prior to arriving at camp so altitude sickness was not an issue for them.

This farm-based group brought chain saw skills, and since all but one was 18 or older we were well equipped for the work at hand. They quickly learned the fence building skills, were capable of running the tractor and chipper, and used their strong bodies to easily transport lodge poles where they needed to be. This group was very capable of navigating the rocky, steep hillsides to pick up slash, and cut down burned trees. There has been a great deal of satisfaction with the use of the charred trees with branches removed, to construct the fence. The fact that even though fire ravaged the camp, some of what was left worked extremely well in the construction of the fences was a great joy. Stump removal began this week as the stumps of trees were cut flush with the ground so navigation of the camp grounds will be less treacherous.  More TPs have been constructed for burning this winter and bleachers that were damaged in the fire were deconstructed.

Seeing the transformation of the camp as the weeks have progressed has been so exciting. Kevin and Steve, who are the camp representatives have been very happy with the work that has been accomplished. They have expressed their gratitude for the hard, dirty work the groups have done.

Next week we will had another railing to the first fences built, do more debris cleanup, help with the installation of an drip irrigation system and plant trees. 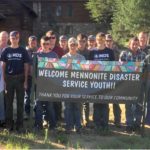 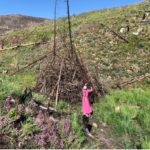 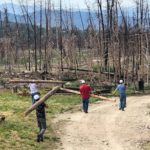