Merlyn, from Ontario, Canada, joined us as a long term volunteer this week.  He will be a crew leader with us for four weeks.  Several groups of short term volunteers arrived on Sunday evening, 15 from Ohio, and two from Illinois.

We began the week with rain again, although it was nice to have warm temperatures along with it! Monday began with indoor work, but later the volunteers could move outdoors and do some painting on the hardie siding.   Two people were putting insulation in a house to get it ready for the professional drywallers to begin their job.   Several sites were ready for hanging doors, putting up some trim, and on one site, doing some final finish up work.

Mid-week found the crews concentrating on exterior painting on several homes.   Concrete was poured on the new build on Tuesday and by Thursday walls were going up.  Indoor work was being continued on the home in Taft.

On Wednesday we needed sunscreen and on Thursday and Friday we needed long johns and gloves!  Suddenly we switched from 75 degrees to 28 degrees!  The volunteers are amazing – Mike gave them the opportunity to choose to work in this weather or not, and most decided to work even though most of the work was outdoors.  Indoor work actually felt just as cold or colder!  Walls were going up on the new build.  On Friday several volunteers went from house to house blowing in insulation.  Work hours were shortened on Friday so everyone could get warmed up!

Tuesday evening we had our weekly campfire and on Wednesday evening Carlos and Elizabeth joined us for our meal and then shared with the group their hurricane story.  On Friday noon, Mr. Stan provided his weekly meal to the volunteers, this time being a turkey ham, eaten inside his partially finished house!  On Friday evening our friends Lupe, Roxy and Alyssa drove over from Bloomington and brought us a delicious shrimp boil!  What a treat!  We all enjoyed the evening listening to Lupe and Roxy sharing about Hurricane Harvey and their lives!

Weekly Words:  Our Lord does not care so much for the importance of our works, as for the love with which they are done. 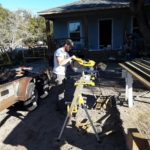