The group just finished up Mike Halfmann’s home and the joy that was expressed by Mike and Jeannie touched each one of us.  Mike has been working on this home since Hurricane Harvey in 2017.  We laid flooring throughout home, painted trim and caulked, helped install an on-demand water heater, fixed sewer leaks and got the gas turned on to the heater.  One of the highlights of the work was installing the accent wainscot wall that he had designed.  Mike had collected the barn boards and painted them, green, blue, red , white and natural. He worked with Bob, Cyndi, and Dave laying out the design. On our last day Mike presented the crew with a heartfelt thank-you and a beautiful plaque that he and Jeannie had designed.

The group then moved on to the new homes that Disaster Aid of Ohio that are building in Aransas Pass. The first order of business was to build steps, air conditioner platforms, and a platform inside a closet to house the heat exchanger.  On Tuesday we were privileged to meet the home owner at Lamont Street.  Sam joined the guys in the afternoon to help Ken build the side steps to his home.  Over and over again he expressed gratitude for the work being done for him and his mom.  On Wednesday in the afternoon, we called 911 after smelling strong gas odors for over an hour.  Seems that a neighbor man was digging with a backhoe and knocked off a gas meter.  We thought we might get a reprieve from work but alas no such thing happened the gas company showed up and took care of the situation. We continued our step building, caulking and building the air conditioner platform. 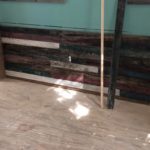 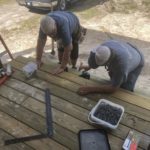 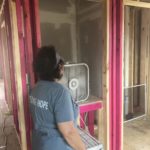 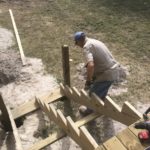 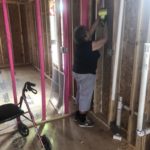 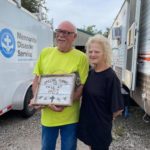