January 5th found some of the long term team arriving in Rockport to get camp set up for volunteers.  This wasn’t too difficult as Disaster Aid Ohio had been using the camp in the fall and had recently left shortly before Christmas.  There are now six long term volunteers here, coming from Ohio and California.

We will be working to complete several homes that were constructed by Disaster Aid Ohio, which were ready for interior and exterior paint.  Several more homes need to be framed up.

This week we welcomed 11 weekly volunteers from PA and one from just a few miles down the road here in Rockport.  We are working on a house in Taft and several in Aransas Pass.  The work on Monday consisted of two painting crews and one framing crew.  The painting crews began inside the house, putting on primer.  By Thursday afternoon, two houses were completely finished with interior painting!  They were busy and efficient crews!  By the end of the week, flooring was installed in one home also.

The crews were also very busy putting up Mr. Stan’s home.  Early in the week floor joists were in and the subfloor on.  By the end of the week, the exterior walls were up and most of the sheeting was on.  Mr. Stan, the homeowner, is so very grateful for all the volunteers working on his new home.  He spends most of every day on site and enjoys talking with the volunteers.  To show his appreciation, he smoked chicken in his outdoor smoker for all the volunteers for Friday lunch!  It was delicious!

On Tuesday evening Carlos and Elizabeth joined us for our evening meal and shared their hurricane story and their gratitude for the many volunteers from MDS.  We had a great time together!

We had a wonderful first week with our volunteers and accomplished so much! 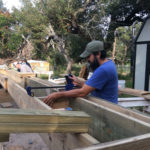 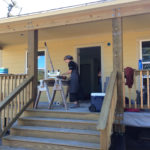