As we prepare for the winter break, our team continues work on several of the new builds.  We have ramps to put on two homes one in Taft and one in Refugio.  The home in Refugio belongs to Roxanne.  She came by for a visit last week as it was being insulated by the team.  She shared the following glimpses of the home that had been damaged by Hurricane Harvey.’ The old house had no insulation in it so I used a space heater in the winter months.  In the hot heat of the summer I used a couple of window air conditioners.”  “I just can’t believe this house will be ours.”  She will have her mother living with her.  Her mom is in her seventies and has some disabilities, thus the need for the ramp.  The home in Taft belongs to Jesus.  His daughter shared with us that the current site had been where her father and mother had lived.  Jesus’s wife was an invalid for several years and he cared for her.  After her passing her father faced some disabilities of his own and she relocated to be closer to him in order to help.  He came for a visit before we had built the steps. He was so anxious to see inside that he climbed the step ladder we had against the porch to tour the inside.

We also traveled to Robbstown to work on the home of Sue.  What a warm and loving reception we received when we pulled into her driveway.  In her eighties she flew out the door threw up her arms and said “Praise Jesus, Praise Jesus, Thank You Jesus.”  The home had sustained roof damage and due to that she had mold in two of the bathrooms and two bedrooms.  The team removed old ceiling tile that was damaged, some flooring, and cut out some dry wall in a bathroom. Two of her daughters came by and thanked us over and over again.  During the afternoon work she called her son to share the news of our arrival.  She said “There are three couples here and the women are working as hard as the men.”  The home will receive some roof repair and then we will return to finish up the project.

In just a few days we will be saying farewell to Pam and Steve, Bob and Cyndi.  This is always one of the most emotional times.  It’s like loosing a part of your family.  One of the wonderful traditions we have here is the waving of the white hanky, we don’t say goodbye we say until we meet again.  We can thank Norm and Carolyn for that.

May you reflect the love of Christ this season.

Duane and Jean, Bob and Cyndi, Steve and Pam 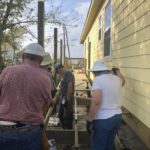 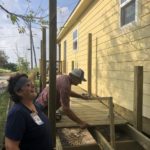