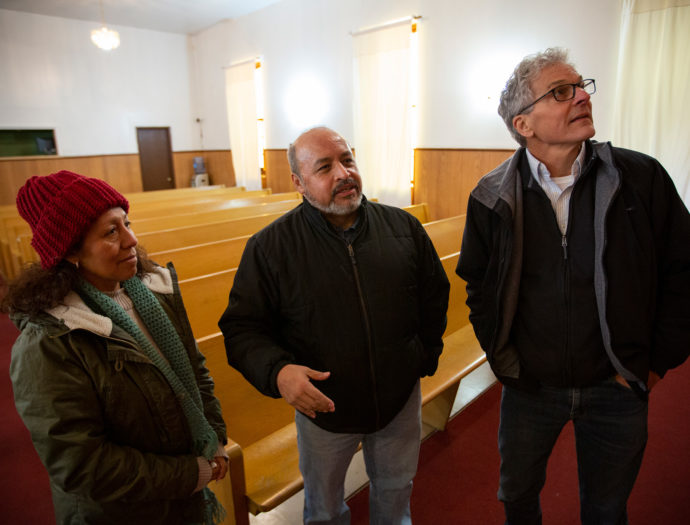 Below find a story from Pennsylvania—the faces and places of MDS following God’s call to help others.

Building a “melting pot” of volunteers in Philadelphia

Pastor Fernando Loyola described how he feels about the volunteers from MDS who installed a new roof on his church—Centro de Alabanza—in south Philadelphia.

For most people, “it’s very normal to have a building, and to have it well-fixed,” said Loyola. “For us as an immigrant church, it’s a miracle—a real miracle.”

Through connections made with many partners, including Mennonite Men, Kingdom Builders, and the Eastern Pennsylvania and Western New Jersey MDS Unit, the church received a new roof in February and will also receive new gutters and windows. The 100-member congregation worked alongside the volunteers.

“It’s about more than the roof,” said Loyola. “It’s all people who were involved to make this project come true. It’s money we didn’t have. It’s people we didn’t know. Things that we couldn’t do. It’s a miracle. It’s an old building but we love it. We don’t make an idol of this building but we know it comes from God.”

One thing that made the project special was the MDS volunteers were a “melting pot” of people from different denominations—Pentecostal, Amish and Mennonite—and from the U.S., Mexico, El Salvador, Ecuador and several other countries.

“We had people working on the church from all over the spectrum,” said Jay Johnson, one of the newest board members of the Eastern Pennsylvania and Western New Jersey Unit.

Building cross-cultural relationships can take a long time and a lot of trust, he added, but working together on the project made it easier.

“Sometimes politics and theology get in the way and you lose sight of what your real goal is,” he said. “But working together on this project, nobody worried about the politics or the theology of the person next to them. Everybody enjoyed it and a lot was accomplished.”