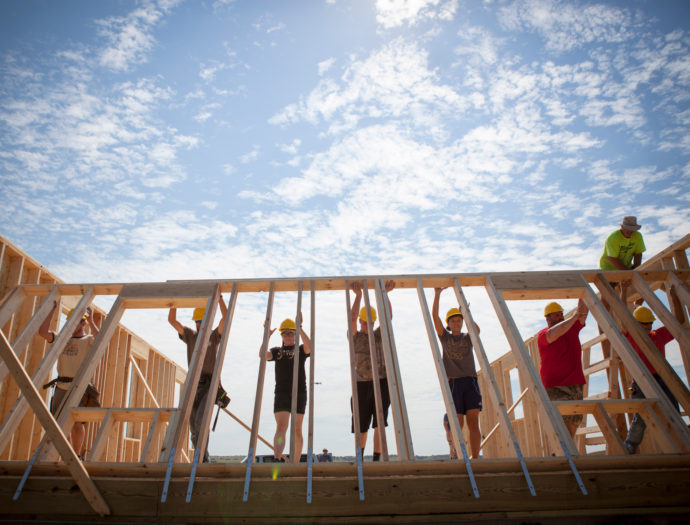 Souderton, Pa. – Despite temperatures in the high 90’s and extreme humidity volunteers from the Eastern Pennsylvania and New Jersey MDS Unit began a Partnership Housing Project (PHP) on June 30 and continued working on the home through one of the hottest weeks of the year.

Nineteen volunteers from seven churches in the eastern Pennsylvania area let their hammers ring hope on Saturday, June 30th in the parking lot of Souderton Mennonite Church. They were building a house for Anna and Jerry Rucker of Clendenin, West Virginia.

The Mennonite Disaster Service PHPbrings sponsoring groups, such as churches and MDS Units, together with a homeowner who lost their home because of a natural disaster to not only build a house from start to finish but build a relationship with the homeowner.

The work began Friday afternoon, June 29 and continued through the fourth of July holiday. A 2:30 p.m. delivery of lumber and cement blocks on Friday allowed five volunteers to begin laying the piers, plate, rim joists down on the parking lot under the direction of Keith Reed.

On Saturday, after a short meeting to decide on crew leaders, what work needed to be done and fully aware of the high temperatures and the need for safety, Souderton Mennonite Church Pastor Tim Bentch offered a prayer, and then everyone went to work.

It was amazing how people who didn’t know each other worked together to accomplish the job at hand. Volunteers come from several churches including Zion, Souderton, Indian Valley, Swamp, Perkiomenville, Ambler and Butter Valley.

Three saws were cutting the lumber, men and women were carrying it to its destination, while the skilled laborers and their helpers nailed it in place. There was very little standing around (unless someone needed a break), but everyone jumped in to help.

By 1:30 p.m. two-thirds of the house was finished. Two long walls were ready to stand up, but it was decided that the group needed to stop for the day.

On Tuesday evening, July 3, eight volunteers set up the walls that were built on Saturday. Five lifted and held the wall while two others screwed the walls to the floor and installed braces to hold the walls plumb.

Everyone was involved even the young boy who came with his father. Those who worked were Jim King and his friend Lew, Jacob Myers, Dave Dengler, Russ O’Rourke, Benjamin O’Rourke, Steve Benner, and Keith Reed.

On the fourth of July celebrating Independence Day meant building more walls for the house.  A team including Keith Reed, Michelle and Brian Hackman, and Brian and Alan Landis worked for part of the day. These folks were building and adding on to the outside walls. It really was beginning to look like a house.

On July 14, the house will be dissembled in sections and then shipped to Clendenin where it will be finished for the Rucker family by volunteers. This family lost their home when the Elk River flooded after heavy rains in June of 2016.

Click here to participate in the Partnership Home Project