Thursday evening we were joined for dinner by Carlene Anders, the CEO of the Okanogan County Long Term Recovery Group with which MDS collaborates here. Carlene is a long-time volunteer firefighter and smoke jumper and former mayor of Pateros, WA. She showed a video of the wildfires in 2014 and 2015 and talked about the long-term effects of these fires on the many communities in this county, including the Colville Reservation.

Volunteer work this week focused on three houses, which began the week with poured foundations. On Monday the volunteers capped the foundations on houses 5 and 6. On Tuesday they put up the pre-built external walls on both houses and the internal walls on house 6. Additionally, they began capping the foundation of house 7. On Wednesday they put up trusses and began sheeting and papering the roof of house 6, put up the interior walls and top plate at house 5, and finished capping the foundation at house 7. On Thursday the roof work was completed on house 6, the trusses were set and the sheeting and papering were completed on house 5, and the walls were put up on house 7. Friday morning the trusses were set on house 7 and the roof was sheeted and papered by midday. An amazing blitz! 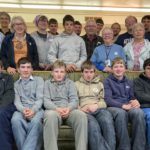