A group of ten weekly volunteers joined the May long-term team Sunday, May 15. The group included Jerry and Diane Stoltzfus from South Carolina, Harold, Martha and Justin Amstutz, from South Carolina, as well as Lee, Clay, Carson and Isaiah Hoover, with friend Cody Martin from Georgia. Nelson and Marie Kling, from Lancaster, PA arrived Saturday, May 14 to shadow office and cook positions. David King, a long-term crew leader from Broadway, Virginia, joined our group on Wednesday, May 18.

A great hard-working crew including several teenagers, these volunteers tackled the completion of dismantling the old plywood floor from House 095 and began siding installation. Some of the group disassembled the steps from another client’s removed FEMA trailer and hauled loads of debris and trash to the landfill. They also worked on installing the new plyboard flooring, removed and installed a new deck and ramp leading up to the house and installed insulation, all at house 095. While raising up the house, Cody took the job of crawling under the house to help complete the task. The homeowner expressed her appreciation by serving pizza to the entire crew on Thursday.

Project director, Don, signed more job cards and ordered windows, tub/shower and other supplies. He also has the daunting job of taking geo-stamped pictures and following the stringent SmartHome gold standards throughout the process of building house 094. We are grateful Nelson helped us figure out how to take geo-stamped pictures and located and ordered the special Simpson strong-ties needed for house 094.

We celebrated the 15th birthday of twins, Clay and Carson, on Wednesday, by serving Dairy Queen ice cream cakes for dessert. The boys would have been able to get their driver’s permits on their birthday had they been in their home state of Georgia. Instead, they agreed to put off this special event, so they could volunteer in Jennings this week. Thursday evening, the Jennings Church of Christ created a unique experience for us by serving a wonderful crawfish meal. They set up their large cooker outside and boiled potatoes, vegetables and crawfish in a spicy sauce. Once cooked, they spread the crawfish down the middle of the table so everyone could participate.

For the Jennings Team 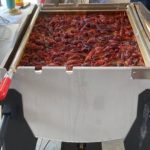 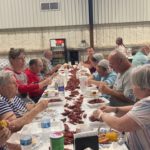 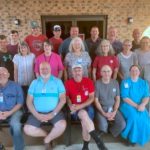 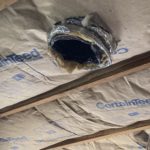 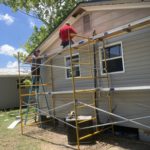 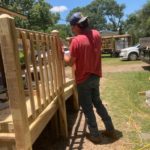