This week a couple from Manitoba came to volunteer with his parents, who were already here.

At Hal & Linda’s: the house area was staked out and excavation finished.  Ready to set up foundation forms.

At Robert & Michelle’s: we were excited when the inspector passed inspection on the foundation forms and we could order the concrete!! So, our first concrete pour for our first foundation was on Wednesday, with the help of Robert, the home owner, we had a great day! By the end of the week we were almost finished with the ICF Bloc forms. The 8 x 10 shed was finished.

The cook and her assistant did an amazing job of feeding us great meals, fresh baking and 3 kinds of cookies!  We will miss them next week 😊. 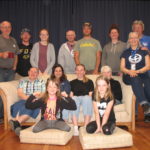