As autumn moves into this area, nights are cooler and still the beautiful sun carries on, shining on the mountains across from the Westwold Hall where the crews are housed and meals are served.  The harvest moon, along with stars lights up the night sky. What a wonder of creation we are observing each day!

While there were some issues with supplies, tools and doors that didn’t fit, still our volunteers made excellent progress. Insulation was blown into the attics at both the Eager and the Peden house.

With the help of a Genie lift, the Hardy Board began to go up on the Peden house and by week’s end the second story siding was completed along with the painting of the outside window trim. Flooring, and inside safety railing for the stairwell, as well as mudding and painting on the lower level kept the volunteers busy.

At the Maissoneuve home, the attic and crawlspace entries were trimmed out. Shelving went up and the owner’s table saw was repaired.

A snowbreak was added to the roof at the Sunby/Hanton home. Since the correct sizes of cabinet doors were unavailable, door fronts were rebuilt and installed, along with shelving.  The door for the furnace room was finished and installed.

The Peden house was a busy where flooring and painting trim were going on at the same time.  Door openings were adjusted and doors installed. The visit from electrician, Ryan Hoock was timely and appreciated. He was a delightful addition to the group at the camp.

Thanks to the group of skilled young adults from Ontario for their enthusiastic work and wonderful spirit! They were quick studies when faced with new tasks. The crew leaders all remarked that they were a pleasure to teach new skills to. Their parking lot prayer time before leaving for the final time was a beautiful thing to observe. They will be heading back to their homes after enjoying some of beautiful BC over the weekend. They are: Henry Bueckert, Maggie Friesen, Margaret Redecop, Jake Reimer, Peter Reimer, JT Thiessen,  Johnny  Thiessen, Makayla Wall, and Sara Wiebe.

Annie and Susie Dyck also left us after a two week stay. Also leaving us are Wayne and Val Papple from Alberta and Don and Sandy Loewen from Winnipeg. Alvin Klassen, Henry Wiebe and Priscilla Epp will carry on into next week to be joined by some new volunteers.

Our incoming project director, Harold Friesen, appreciated the MDS crew leaders and volunteers who spent this week at Monte Lake. Willy Plett needed to return home and Lee Dyck moved into the office role with a lot of help from Priscilla who, along with Annie served delicious food from the MDS kitchen all week. Gerald Dyck served as crew leader.

The camaraderie between all the volunteers made this a delightful time together. Morning devotions followed by stretches with Sandy and evening games of spoons and Dutch Blitz as well as morning awes over the sunset and evening forays out to watch that hunter moon combined with the days on the projects to make this a memorable week. Thanks to God for safety on the work sites. 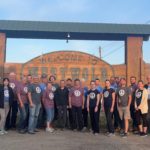