A family of four from Manitoba joined us on Sunday, to make our MDS family grow to eleven in all, one is from B.C. and the rest are from Manitoba.

The gravel that was delivered to our camp site last week was wheelbarrowed into position as walkways for the bunk trailers, but only after landscape material was correctly placed first. We have had a fair amount of drizzly wet weather, so this really helps to keep our footwear cleaner.

After receiving the permits, the excavator arrived first at Michelle & Robert’s yard. The first thing to be finished by Todd and his crew was the outhouse, which arrived in sections; floor, walls and roof. The excavator did a good job on the part you can’t see and used the boom to lower the roof. Todd’s crew of “masons” laid a unique rock stairway to the new facilities.

The area for the new house build was staked out, excavated and packed with a compactor. The foundation forms were made, and rebar will go in Monday, and ready for inspection on Tuesday.

At Tammy & Dustan’s an addition to the camper they are living in was installed while they are waiting for their new build; the soffit & facia on the east side were finished and a new door with flashing was installed.

The excavator also arrived later in the week and removed a mountain of dirt to provide for a level area to start with the foundation forms next week.

At Ted & Michelle’s, the green metal roof was securely screwed down, flashing put on and plywood added on at gable end. The house was wrapped in Tyvec and lots of plywood strapping to keep it in place. The front door did not close properly, and after Gordon had fixed it, both he and Kaitlyne (Ted’s daughter) were happy. Now we are waiting on Ted to do the electrical and bring windows. Dave met with the inspector regarding septic system inspection on Thursday.

Dave and crew went to Shepherds Home Hardware in Armstrong and loaded material for two   8 x 10 sheds. (Lindsay got to drive a truck for the first time!) They unloaded these materials at Michelle & Robert’s and at Hal & Linda’s. The first shed, at Michelle & Robert’s, got the floor on skids, walls up, sides sheeted, door made & installed, and a start on rafters. Hope to finish this shed and start Hal & Linda’s next week.

Some home-schooling work is done by two girls, our future volunteers! 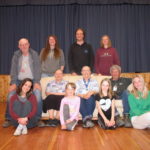