We had 10 Long term volunteers this week, and we had three day workers who each served 2 days. Thanks Joe, Bob & Hugh!

We welcomed our new cooks for three weeks: Karin & Helmut Hein from Abbotsford. They arrived with a vehicle full of groceries and we have not gone hungry! Our dessert consumption has gone down; poor Karin, who loves to bake!

Robert Prinse also came this week; if anyone knows Robert, you know he moves fast and works hard. He’ll be here for the next 3 weeks.

Work continued at our three site builds.  Gravel arrived at Michelle Maisonneuve’s for weeping tile and also for the crawl space and piping for the Radon.

Footings were poured at the Sundby/Hanton site, inspection approved and the ICF blocks should be up.

ICF blocks were put up on the Eager build and it passed inspection on Tuesday. We hope to pour concrete on Wednesday on both sites. if inspections pass.

We invited the Eagers over for supper on Tuesday night. It was such a delight to have them and their three children in. The children ran around the hall and, sad to say, but Poker Chips kept 2-year-old Thomas entertained the entire evening. The once-shy Thomas is chatting and happy and gave Linda a kiss goodnight (very unusual for him according to dad). That was my highlight!  Tammy is still struggling with what she has lost, mainly not being able to provide the food sources for her family, raising chickens and having a garden.

We had sunshine and some beaming faces and we made good progress on our builds. 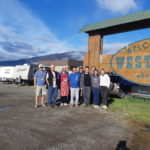 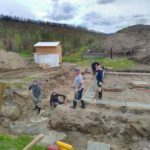