This week we had the privilege of hosting a youth group from the Evangelical Mennonite Mission Church (EMMC) in Winkler, MB. There were five leaders (including Tim Goertzen, the Youth Pastor) and 14 youth in this wonderful group. Immediately upon arrival, the Westwold Community Hall was full of energy, laughter, and excitement.

The amount of work that this group was able to complete was astonishing, and the community of Monte Lake (and Westwold) has been incredibly grateful. We have never received as many texts, messages, letters, and gifts of appreciation from the local community as we have this week. Truly the Kingdom of God was spread through the passionate and energetic work done by the EMMC youth group.

Most of the youth worked at various homes within Monte Lake, doing tasks such as planting seedlings (over 800 seedlings were planted), doing yard work, and building fences; this was all arranged by Anita Jacobsen, a local community member.

On Tuesday and Wednesday, Monte Lake experienced a deluge of rain, causing serious flooding on the highway and at local homes and campgrounds; an individual who heard about MDS came to our camp and asked if anyone would be able to help with clearing debris and filling sandbags to stop flooding.

The EMMC youth group was immediate in their response and filled hundreds of sandbags over the course of two days, saving a local campground and clearing numerous driveways and side roads from flood debris.

Progress was also made on the MDS homes. Trenches were dug, backfilling finished, interior and exterior walls framed, concrete poured, peel and stick applied, and inspections passed. Some of the homes have been prepared for trusses that will hopefully arrive in the next week.

On Wednesday, we had Anita Jacobsen come and share her story and the community’s experience with the Monte Lake fire. You could hear a pin drop as everyone was so focused on what Anita shared, and by the end of the night most people were wiping away tears.

The impact this group has had in the community is already being felt, and the youth group has come away with some incredible experiences that they will take with them for the rest of their lives.

Sadly, we are saying goodbye to two long-term volunteers – Robert Prinse (crew leader, serving for four weeks) and Betty Ramones (Sheep and Goats – serving for eight weeks). Their service was amazing and their presence will be fondly missed. We look forward to seeing what God does in and through them as they leave from here.

Regarding incoming long-term volunteers, we welcomed Sofia Epp (Sheep and Goats from Steinbach Bible College) and Ralph Hughes (a crew leader from Nova Scotia); they have already settled in and have made an incredible difference here in Monte Lake.

Monte Lake community is sincerely thankful to all of the work accomplished by MDS and its volunteers. We keep hearing the same thing: “We are not forgotten.” Let us continue to be the hands and feet of Jesus and extend his Kingdom to the lost, broken, and needy! 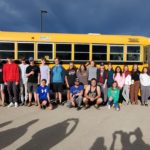 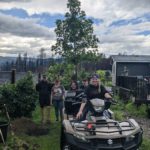 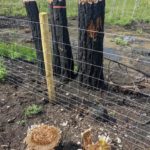