MDS was blessed with an incredible group of volunteers this week. We had the privilege of hosting a small group of guys from Blumenort (Man.) Mennonite Church (two leaders and two youth), as well as a number of couples from Abbotsford, Alberta, and Manitoba. Some came as first-time volunteers with MDS, while others came as experienced workers with MDS. We thank each and everyone of them for coming to serve this week and make God’s name known to this community.

We would also like to mention Nestor Stadynk, Pamela Svokanovski and Jerry Hughes who decided to stay an additional week after serving last week; we have truly enjoyed their company and wish them well as they go on from here.

Despite the heat wave that hit this community this week (with highs of 35 degrees!), these volunteers worked safe and made a lot of progress on all the homes. The Peden home finished framing all the exterior walls and is ready for trusses, thanks to the work of some skilled volunteer framers.

Both the Maisonneuve and Hanton homes finished the truss work and added the roof sheeting;  the fascia was also added to both homes, along with insulation stops and Tyvek wrap.

The Eager home also made a lot of progress, as much digging, trenching and backfilling was required before the concrete pour on Thursday morning. Once again, we are amazed at how much this volunteer group was able to accomplish this week and we are sincerely thankful for their service.

We had the privilege of hosting Rob and Michelle (the homeowners of the Maisonneuve project) for dinner on Wednesday night. Hearing firsthand from fire victims was impactful, as was hearing how grateful and impacted they (and the local community) have been through the work done by MDS.

This week we welcomed Hannah Cober, a long-term volunteer from Ontario. While she initially came to work in the in kitchen as an assistant cook, she was needed on the jobsite and was more than willing to help and serve in whatever capacity needed.

This weekend we will be saying goodbye to two long-term volunteers: Roman Heuft (the Project Director) and Kobe Hutchinson (the Office Manager). Both Roman and Kobe served from June 19th to July 16th. Roman will be returning as Project Director later in the season, while Kobe is immediately driving to Princeton to serve at the MDS Family Camp project for another four weeks before returning to school at Columbia Bible College. We thank both for their willingness to serve and grow and for how they served this community.

Ike and Priscilla Epp will be coming to replace Roman and Kobe in their respective positions. Please be praying for them as they serve! 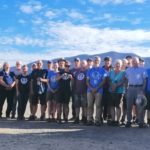