Our team this week included 7 weekly volunteers from Goshen, IN, 5 long-term volunteers, Mim & Leo Martin, from New Holland, PA, Jonas Schmidt from Germany and Don & Rachel Horst, from Newton, KS bringing this week’s team to a grand total of 12.

It was good to have a break from rain showers Monday morning giving things a chance to dry out a little bit as there is a lot of standing water in the yard at Shirley Zeno’s house.  Our team dove right into the task of mudding and adding drywall around the closet door jams.  Two of the volunteers went with Don to Darrell Tracy’s house to lay a piece of plywood over a spot in his floor that is dangerously weak until it can be repaired properly.  A 60% chance of rain was in the forecast for all week but as the week went on, the sun came out and the team was able to work outside, including the spreading of gravel in Shirley’s yard where it was swampy, and hanging more hardy board siding.

Highlights of the week included a fun table tennis tournament with 8 contestants ranging from ages 19 to 80. Gayle Frey was awesome in moving up to the next bracket, after taking on Don, and then being challenged in the last round by her husband Dayton, who took home the grand prize of a Louisiana Alligator Pen.  Janet & Jim (the laundry man) joined us for our Thursday evening meal and enjoyed coaching Jonas on his table tennis game.

Plans for the upcoming week include moving ahead on Shirley’s house with finishing touches on the mudding, beginning painting and weather permitting, more installation of siding.

It was delightful to see how encouraged Shirley was when she came by and saw progress happening at her house.  She was especially grateful for the gravel that was spread in the swampy area under the side porch.  This was an industrious group of volunteers, not only on the job, but also at camp, playing table tennis and patiently investing energy in completing 5 challenging jig saw puzzles! 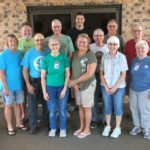 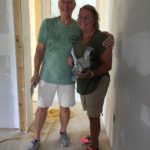 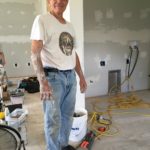 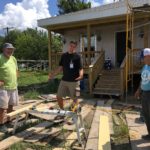 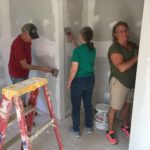 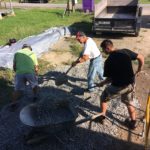 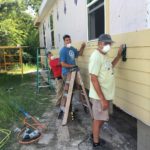