Three weekly volunteers, Carli, Vicki and Randy Wilt from York, PA arrived safe and sound Sunday evening. The Wilt family was welcomed on their first MDS assignment by our long term volunteers, Mim & Leo Martin, from New Holland, PA, Jonas Schmidt from Germany and Don & Rachel Horst, from Newton, KS.  Our team of 8 was open to what the Lord had in store for us this week.

It turned out to be another week of sunny days which allowed volunteers to continue hanging hardy board, painting hardy board and installing trim at Shirley Zeno’s.  Another load of gravel was spread in the swampy area in front of the house.  Don tried his hand at doing some skim mudding and encouraged Vicki & Carli to give it a try as well.

Highlight of the week included treating everyone to a cool refreshing smoothie from the Welsh Donut shop; fellowshipping with the Jennings Church of Christ congregation Wed. evening and  taking in some local culture by going to a Thursday night Welsh Highschool football game (Welsh won 65-0).

Plans for the upcoming week include getting the interior of Shirley’s house completely ready for paint and carefully brushing the “four leaf clover green” paint on the exterior walls.

Indeed the Lord had surprises in store for us beyond what we had planned and we give him the praise for His leadership. 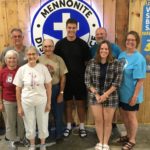 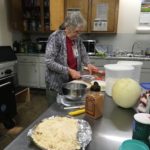 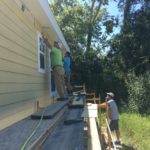 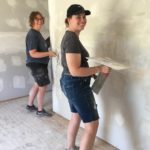 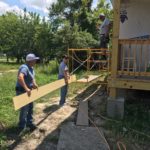 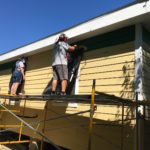