Within three days, John and Alan’s crew removed shingles, applied tar paper and put new shingles on
three different houses – James’, Diane’s and Lillie’s! Doug’s crew taped, mudded and painted ceilings at
Virginia and Tonie’s house. Kitchen cabinets were sanded and painted as well as the tub surround and
water heater installed at Tonie’s. Another “first time experience” for several of these young ladies was
hanging dry wall on the ceilings at Tina’s house.

Highlight of the week was how quickly these ladies tackled the work they had never done before (roofing
and hanging drywall) and still had energy to play vigorous games of volleyball in the evenings. Another
highlight was when we all gathered at Diane’s place to celebrate her birthday. Our cooks surprised us all
with refreshing ice cream sandwiches on a warm sunny day. They topped off the surprise with a special
cupcake for Diane. Diane, who turned 69, said she had never had a birthday party before.

Next week we hope to finish up at Tonie’s house and will probably be hanging drywall in Tina’s house
instead of doing roofs as there is rain in the forecast for the entire week.

Submitted by Rachel Horst on behalf of the Jennings, LA team 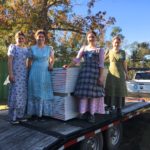 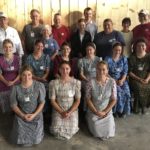 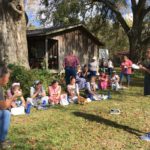 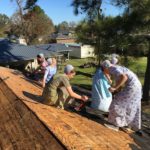 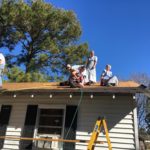