Our mornings began with a one-minute neck massage, and the week ended with a ten-minute massage for willing participants.  That’s the benefit of having a licensed massage therapist on the work crew.

This week we experienced the miracles of “lost” and “found”.  Keys that just could not be found apparently fell off of the truck into the street gutter.  Eyes were opened and keys were found.  A check also miraculously reappeared.

Work continued on a house that was in a state of disrepair from water damage and neglect.  A new front porch was built, and siding was removed and some was replaced.  The kitchen floor had to be removed and a beam was placed for a load bearing wall.  Floor joists were completed in the kitchen and bedroom and plywood was set for the kitchen subflooring.  One of the comments on a volunteer feedback form stated that this particular volunteer would be willing to serve with MDS again “because it was great to help others in need….”

A family consisting of the mother and her children came to work.  Their husband and father had passed away in December.  This week marked their 20th wedding anniversary, and they wanted to honor him by serving.  We all celebrated the “creation of new memories” with an ice cream cake.  Together they patched drywall, sanded and painted in the house they worked in all week.

In the hot sun with little to no shade workers framed the new house, finished the girders and began putting up floor joists.  A few other projects elsewhere included doing siding, electrical work, and mudding and taping drywall.

There was another goodbye this week as our head cook headed home.  The meals received rave reviews!  The church provided gumbo for one of the evening meals.  Many ate it as they do here—with potato salad in the bowl.

In spite of the heat, hard work and dirty conditions, smiles were seen on the jobs and when volunteers returned to airconditioned comfort and a nice hot shower.  We are grateful for all that was accomplished!

For the Jennings crew, 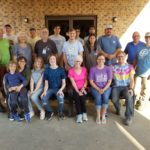