This week’s group wasn’t in Kansas anymore, but they were glad to be in Jennings with MDS.  A multigenerational group of eight joined us.  A surprise bonus was discovering that three of the volunteers in Jennings represented three generations of the same family.  What a legacy of service!  They livened things up in the evenings with a wild ping pong game.

On the house in Iowa, they cleaned up, painted walls and trim—lots of trim–; worked on window sills and began laying the flooring.  They wanted to get it finished so badly, but time ran out.

The house in Jennings is undergoing quite a kitchen transformation!  Drywall went up, electrical work was done, windows and a door were installed.  Finally, they could begin mudding the walls.

At the new build in Welsh they worked on the roof and wall sheeting a couple of days.  After realizing that the wrong size boards had been delivered, they cut them to size and could finally begin framing the inside walls.

Some of the young people came with hearty appetites.  The food didn’t disappoint and there weren’t many leftovers!  They used that energy and everyone worked hard all week.

From the Jennings crew, 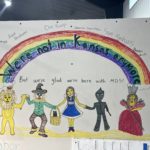 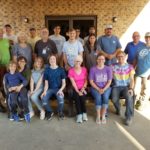