They arrived Sunday evening on a coach bus, full of energy that lasted the entire week. Twenty-three Old Order Amish young people from Lancaster County, Pennsylvania, all between the ages of 19 and 26, had chosen to spend a week repairing hurricane-damaged houses in Jennings, Louisiana.

The group worked on four houses. One group spent the week on inside repairs on one house, with their crew leaders, Michael and Amos. They demolished ruined cabinets, windows, doors and walls before insulating, drywalling and installing new windows and doors. The other groups, with their crew leaders, Chris and Drew removed old metal and shingles on several roofs, before installing the new roofing materials. They completed three new roofs, including one on a new build. They also installed some of the siding on the new build. Our long-termers, Don, Jerry and Ryan were busy supervising, delivering supplies and hauling debris to the landfill. Don closed two of the jobs. Dianne prepared delicious meals to keep the group well-nourished.

One of the homeowners joined us for supper Friday evening, in time for him to say good-bye to this group of volunteers. Several volunteers reported their highlights of the week included being served lunch each day by one of the homeowners, playing a keyboard at one of the houses and, at least for one of the girls, the experience of putting shingles on a roof, a first for her. “I really enjoyed my job,” she commented with sincerity. Each evening, after a hard day’s work these volunteers played outdoor games, including volleyball and quoits.

We will miss Jerry and Dianne’s expert leadership as they return home this weekend. Our weekly volunteers the next few weeks are minimal, but we look forward to moving ahead with needed repairs.

For the Jennings team, 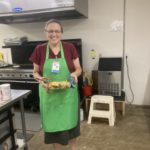 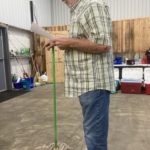 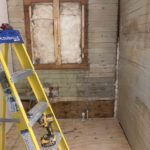