This week we have a lively group of young couples from near Williamsport, PA. They are all related except the driver and his wife, so they have a lot of fun together, as well as with the rest of us. Jess Rempel and Clayton Reesor are still here as well but will both be pulling out by Saturday this week. They have been a big support with continuity.

One project this week was Tina Deshotel’s house, which was completely gutted and redone inside. It is now getting painted.

On Thursday evening, Tina and Vernon Deshotel came to dinner with their grandson, Grant. This was a big step for Vernon, as he has not yet fully recovered from this second storm demolition of his house.

Tina told their story, with many tears, of the terror the storm brought, the way their roof was destroyed to let in water, and the spiritual devastation it brought them, particularly Vernon. He got so depressed he could not walk. Tina thought he would die. He is lots better now but still has quite a limp and a stoop.

Tina Deshotel had to wipe many tears away.

Grandson Grant had great fun playing ‘catch’ and ping pong with the guys.

The other project was Tena Benoit’s house, which was partially blown apart and needed new siding and roof trim/soffit, and ceiling tiles inside. The team is almost finished painting the new hardi-board siding and re-installing the ceiling trim. Tena is so grateful, she came to dinner just to thank everyone. 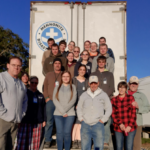 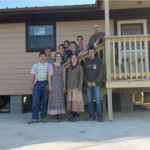