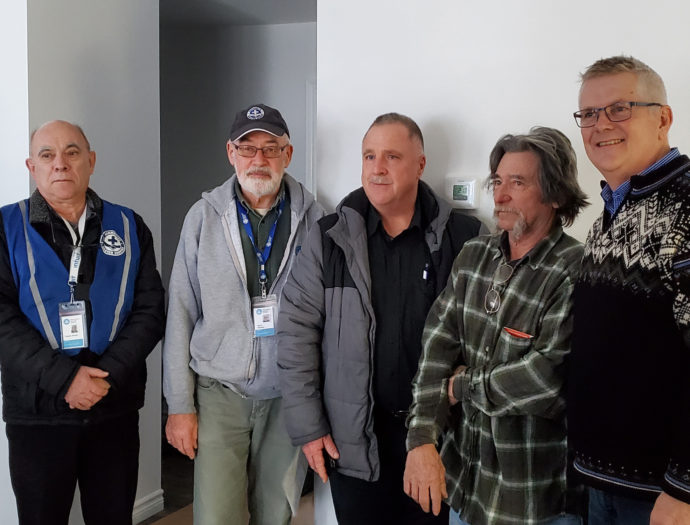 COUNTY OF RENFREW, Ont. — “I wanted to crawl into a cave and never come out again.”

That’s how Bill Overton, 66, of Ontario’s County of Renfrew felt last spring when he saw how floodwaters from the nearby Ottawa River had destroyed his house.

“I knew high water was coming, so I did everything I could to keep my house safe,” he says.

This included putting up a meter-high (three foot) wall of sandbags, making sure the sump pump was in working order, and putting all his belongings up high on counters and tables.

It was to no avail. “That was the highest water I’ve ever seen,” he says, describing how the deluge overtopped the sandbags and filled his house with a metre-and-a-half (five feet) of water.

Worse, the house sat in the water for over a month before the river receded.

Looking at his ruined home, located about an hour west of Ottawa, “I was tempted to go out and get drunk,” says Overton, who has been sober for over 40 years.

“I didn’t think I would be able to start over at my age.”

But then the local long-term recovery committee chose him to receive assistance from Mennonite Disaster Service (MDS), along with four other homeowners in the Whitewater Region of the County.

“MDS was a godsend,” he says of how volunteers came alongside to build him a new house. “The help gave me a real boost.”

While waiting for his house to be completed, Overton, who works in construction, lived with friends, relatives and, during the summer, in a tent on his property.

In December, during his regular seasonal layoff, he enjoyed working with the volunteers. “It was good to get to know some of them better,” he says.

On January 23, Overton’s house—raised 2.4 meters (eight feet) above the ground on stilts, well above the flood level—was one of three homes formally dedicated by MDS.

During the ceremonies, attended by MDS Canada staff, leaders of the local MDS Unit in Ontario, volunteers and local recovery committee members and government officials, homeowners were given a quilt and a Bible. The dedications concluded with a prayer of blessing for their new or repaired homes.

Altogether, a total of 97 volunteers from Ontario, ranging from ages 15-81, gave 515 days of work at the five houses. Based on guidelines for establishing the value of volunteering set by the Conference Board of Canada, the time they donated was worth over $111,000.

“It was a privilege to help Bill and the others get back into their homes,” says Nick Hamm, who chairs the MDS Unit in Ontario, one of six provincial units from the Atlantic region to B.C. that respond to local disasters in Canada.

“It was great to see such a good response from volunteers in the province.”

The project, which ran from October to January, was made possible with financial support from the Canadian Red Cross. It was done in partnership with the Whitewater Region Flood Relief Committee and the Our Lady of Mount Carmel Roman Catholic Parish of the Pembroke Diocese, which allowed MDS to use a nearby rectory to house volunteers.

Funding for materials for the homeowners was provided by Disaster Recovery Assistance for Ontarians, a program of the Ontario provincial government.

Noting there may be additional work for MDS in the area in spring, Hamm says service opportunities like this are a great way for people in Ontario to help others. “They don’t have to go too far away to do service—they can make a real difference close to home,” he says.

As for Overton, he is grateful for those who came to help him when all seemed lost.

“MDS saved my life,” he says. “I wouldn’t have made it without them.”