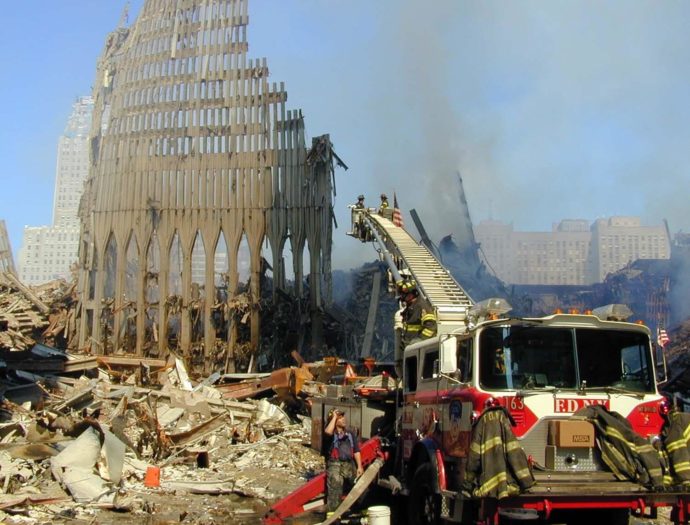 Poem portrays MDS as ‘harbinger of hope’ after Sept. 11 attacks

First time in the city?

Well, for starters there are lots of taxis on the streets,

Lots of people too, all sizes, shapes, colors, and ethnic origins,

Most of them going somewhere

and in a hurry.

with many flats on top of others.

So many people. I don’t believe there would be room enough

for them on the street

if they all decided to come out at the same time.

in this overpopulated corner of the earth.

A subway system that goes everywhere.

It frees the population to move and be

with each other in ways that they choose.

At work, at play,

and in meaningful community.

It takes you underground to places called

Queens, Brooklyn, Manhattan, and the Bronx.

Buildings here are close together,

They form walls that move upward from the street,

beyond what one can see and

scrape the very sky itself.

Each building taller than the last.

lies in a heap several blocks wide and many blocks long,

born who knows where.

There are second impressions too.

of posters with photos.

See how they reveal

the shades of skin

as varied as the colors of the earth.

Be attentive to the words written

Help me find my husband Charles.

Have you seen my wife.

This is our daughter, Suzzanne.

If you see her help her to call us at……

We love her so.

This is a photo of my friend,

I haven’t seen him since last Tuesday.

He may be confused.

If you find him call at……

Then there was the photo I could not take my eyes away from.

Have you seen my daddy?

I miss him so.

Names. Take a look at the names.

And that one over there,

Photos, of people………..so many people.

and countries of their own.

ALL BROUGHT TOGETHER IN ONE WORD.

Some with broken windows,

others with outer walls missing.

The air that still smells of death

The pile that is still hot and smokes,

while the jaws of the huge, tracked vehicles tug at the fallen stories,

one hundred and ten of them.

Or was it two thousand seven hundred and thirty.

The debris laden trucks being rinsed off before leaving the area.

The tired firefighters, marching away from their latest shift

The store fronts with red and yellow signs in their windows which read,

Going out of business sale.

The already vacant store next door.

The loud cries for revenge, war, and death to other human beings.

The long rifles in the airport, held by fatigue clad soldiers

too young to know

when not to pull the trigger.

But third impressions also include harbingers of hope and healing.

The mother and daughter gently leaning on each other

while traveling on the subway.

giving the proceeds to those harmed by the terrorists.

to a lost prairie boy.

Or consider the peace march from union square to time square,

and the cry of the people,

NOT IN MY NAME.

The Vietnam veteran who said,

we veterans have lived with post-traumatic stress disorder

We don’t need any more

and neither do you.

YOU MAY NOT GO TO WAR IN MY NAME

YOU MAY NOT GO TO WAR IN MY NAME.

The grandfather who lost his grandson in World Trade Tower #1 said,

YOU MAY NOT GO TO WAR IN MY NAME.

Such war would bring him no honor,

and me no peace.

We have had enough already.”

The council woman who stepped up to the microphone and said,

YOU MAY NOT GO TO WAR IN MY NAME,

nor do you have permission to take one person from the Bronx.

Not in our name.

The conversations on the street

between persons of faith,

These voices and many, many others are harbingers of hope

We are all called to be

Images and reflections of a newcomer to New York City