This week we had a transition of Long-Term Volunteer Staff. Don Mintmier, (Pennsylvania) arrived on Wednesday for a couple days of overlap with out-going Project Director J. Loren Yoder (Pennsylvania). Other departing LTVs during the weekend of April 1-3 were the cook team: Head Cook Kristina Miller (Berne, IN) who had served here for three months, and Assistant Cook Joan Hopkins (Michigan), who was here three weeks. The departing Crew Leaders were: Les Fisher (Pennsylvania), who served two months, and Dennis Bricker (Pennsylvania) and John Stutzman (Montana) who both served five weeks. Thanks to each of them for their wonderful contributions. The new cook team, Kathy and Steve Rhodes (Virginia) arrived on Friday and Chuck and Ginny Gibson (Michigan) arrived Saturday to work as Crew Leaders.

Wednesday evening we were joined by Richard and Bonnie Rawson, owners of Rawson’s Store, just around the block from our MDS-Okanogan office. They allow us to receive packages at their store and have shared a fenced-in lot for some of our equipment. They shared their story of going into business in 1950 and developing a thriving store, amid many changes in the retailing landscape during the succeeding decades.

Volunteer work this week focused on three houses: Volunteers tiled a shower, installed interior doors and trim, and caulked at house #2. At house #3 they continued with electrical and caulking work and split firewood. The interior painting and roofing were both completed on house #4. Foundation work was completed on Houses 5, 6, and 7, in anticipation of a framing crew from southern Indiana that is working this coming week. 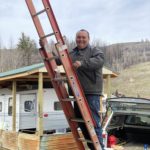 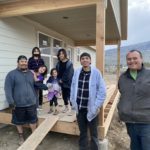 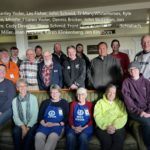 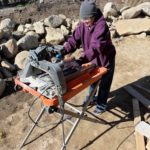 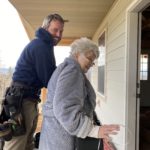 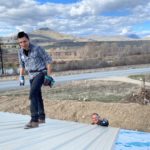