Week 3 at the McAllen project was a busy one again. A group of six men from the Evangelical Mennonite Church in Seminole TX managed to accomplish more than we could have imagined.

At the Cisneros house, electrical boxes were installed, and wire pulled. There may not have been a lot of variety, but there was certainly much accomplished, thanks to Diedrich and Ed.

At the del Angel house, exterior walls were finished, trusses, drip edge and fascia installed, then roof sheathing and underlayment in preparation for shingling. By Thursday the roof was complete, so this crew went to the Rodriguez build (House 3), where they joined the group that had been working there earlier in the week. By week’s end, the roof was shingled and interior stud walls were up.

At House 3, a crew started at the beginning on Monday, setting piers, then soon joists and subflooring were installed. Next exterior walls could be erected, and by week’s end, the trusses were made and up. Either Willy or Veronica, and sometimes both of them, worked with the volunteers every day. The volunteers were fed so well daily that one volunteer reported he hadn’t taken a sandwich that day and he didn’t plan to the next day either!

The guys from Seminole accomplished so much this week, and we were sorry to tell them goodbye. In fact we kept so busy we forgot to take a group photo! So you’ll just have to imagine us, David N, Jake, Diedrich, David R, Josh, Ben, Duane, Roger, Henry, Ric, Joy, Ed, Jonas, Scott, Carl, Laura and Sue 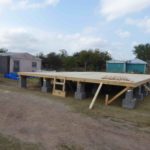 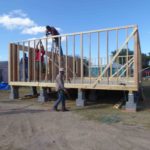 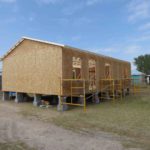 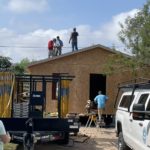