We were a small group this week, consisting of four weekly volunteers, who worked with our construction supervisor, a crew leader and two longterm workers. Electrical work was completed at the Rodriguez house, then it was all hands on deck at the Casas house, our fourth build. The subfloor was finished, walls erected, interior walls assembled, and most of the trusses built.

A new leadership team arrived midweek, so that we also took the time to look back and celebrate what has been accomplished over the past four weeks. As always with MDS, great volunteers combined with solid on-site direction from longterm volunteers, were the key. Drying-in four houses is our goal for the fall work, having the houses ready to handoff to the RV volunteers in January. We believe we are well on the way to success. MDS is always a team effort, and every volunteer has done their part, with no exception.

Last but not least. THE WEATHER!! Cold, drizzly, misty, rainy, windy, ugly from Tuesday on. The volunteers stayed cheerful, despite the lack of sufficient clothing in some cases, and progress was made. There was only one lunch drama, but thankfully no one went hungry. 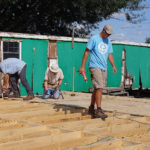 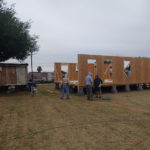 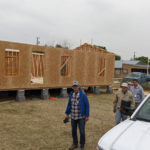