Don Mintmier from Pennsylvania, project director for the month of May, arrived on Sunday, May 1 and met regional director, Phil Helmuth, and Rich Rhodes. The rest of the long-term team arrived Wednesday, May 6: Pauline Yoder, Head Cook from Indiana, Leo and Mim Martin, Crew Leader and Assistant Cook from Pennsylvania, Josie Swartzentruber, Office Manager from Ohio and Lucinda Shirk and Mary Joyce Wise, both long-term volunteers from New York.  After being closed for the month of April, the Jennings unit was ready to open by the time weekly volunteer, Theresa Tobin, from New Hampshire, arrived Sunday, May 8. Phil and Rich were valuable resources in the re-opening process.

The work crew, led by Leo, worked hard the entire week, in spite of hot, humid 90-degree weather. They tore off rotting particle board and ripped out old flooring plyboard throughout the house. We marveled at Lucinda’s strong hammer swing! They worked on insulation and began installing new plywood for the floor base. When the Pot-O-Gold arrived on Thursday, everyone rejoiced! The cooks and office manager appeared at the job site Thursday with refreshing fruit smoothies and donuts from the Welsh Donut shop. The store owner was familiar with MDS work and supplied the free donuts.

Don was busy this first week, signing job cards with several clients, ordering materials, checking on the work crew and creating a bonding experience among the team. He is also working on meeting the requirements of Smart Home for one of the houses we are building.

The Lake Charles group closed their unit for the summer and donated their remaining frozen foods to our Jennings unit. We distributed some of the excess food to local families whose homes we have worked on in the past.

We appreciate working with the United Church of Christ who provide their gym and several rooms in their church for MDS use. The church provides Wednesday evening meal for our group each week. 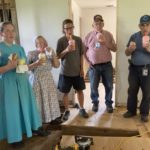 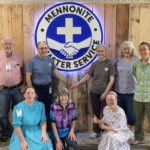 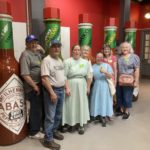