Our second-to-last week for this term of service. Sad, but necessary to take a break. Some brave people will come back to serve in May, June, and July.

The crew this week was mostly from the Lancaster area of Pennsylvania. Twelve of them were with the Millwood Youth Group, serving with MDS for the first time ever. They have tried different projects every year and really liked this one! So we may have started something good.

Perhaps our most exciting, visible progress this week was the work on Gerard Keeley’s new home, which he started months ago and has not been able to work on for quite some time, due to severe health issues. On Monday there were only four walls (studs), and by Friday it was roofed under, complete with shingles. Gerard could only watch, occasionally pick up some trash, and make trips for excellent Cajun food, which he provided daily. He is so moved by the whole deal.

Meanwhile, we have scheduled two house dedications for next week, one at Indira Francis’ home in Jennings, and one at Tricia Stroder’s in Welsh. Both these projects show high promise of being completed in time. Doug has been working hard with his crew, to finish new cabinets, flooring and lighting, while Ed Martin is leading the crew at Indira’s, overseeing everything from plumbing issues to kitchen cabinets.

Doug also spent many hours at the home of Minna Edwards, where we removed a small section that was added on and not roofed properly. The interior was so damaged that it was not worth saving. Turns out Minna had wanted for a long time to have it removed, so the decision was an easy one. We are still working on plumbing over there.

On Thursday night we managed to get three of our clients over to dinner: Minna, Brandilyn and Angela. The latter two have recently received new roofs. They each expressed such warmth and gratitude toward MDS, it was quite touching. Brandilyn is the daughter of Cynthia Julian, our Catholic Charities contact, so it has been extra good to help her. 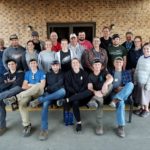 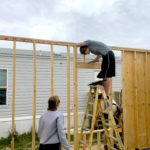