David King championed our roofing effort this week. With his crew of up to eight or nine, he oversaw four roof replacements!! The fourth belongs to the daughter of our Catholic Charities caseworker, Cynthia Julian. We hope some of these home owners will appear at our camp dinner tonight, Thursday.

Meanwhile, Ed Martin continued where Dave Mininger left off at Indira Francis’ house. It is starting to look very beautiful! The walls are painted a bright peachy yellow, picked out by Indira herself, and the white trim is mostly up around windows and along the floors. The snap-in golden-brown floors look downright snazzy.

Doug Goertzen led an itinerant finishing crew, starting with mudding and sanding a little more at Tricia Stroder’s, so she can paint it herself (she is a professional painter). He then finished some details at two other jobs where we replaced roofs. On Wednesday his crew gutted three rooms in Nadean Breaux’s house, which were too badly damaged to just repair. On Thursday his crew started at Minna Edwards’ house closer to camp, which had an addition in one corner that needed taking down, due to a poor roof joint that caused severe rain damage. This project will take several days to build back, once the former exterior is uncovered. 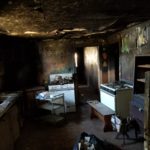 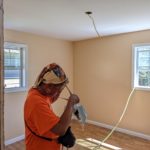 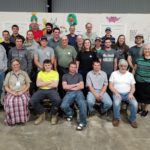