Sunday, August 21st found the early response team gathering for their orientation meeting at Camp Nathanael near Hindman, KY.  Brent Trumbo, investigator, had already been at work contacting folks in the community to see what needs were most needed to be met at the start of the week.  Mike and Linda Stuckey, Project Director and Office Manager, had arrived on Friday, along with Lavern and Ella Sauder, Investigator and Assistant Cook.  A group of four persons from Farmington, PA, and Jacob Nofziger, from Ohio, arrived Sunday afternoon as volunteers.  Lois Wenger also joined us as a daily volunteer Monday morning thru Thursday morning, and a group of 10 Amish from Edon, Ohio, arrived on Wednesday morning just in time for breakfast.

We all saw plenty of destruction and debris on our drive in.  The ditch banks and trees were full of appliances, building materials, toys, chairs, and many other household items!  And many, many homes were obviously in need of muck out and repair.

At the beginning of the week, one group went to help Tammy, whose mobile home and small cabin (where she had been living) were full of wet debris.  The volunteers helped her sift thru her belongings and listen to her talk as she shared much about her life, her feelings, and her sadness about all that was lost.  She especially wanted to save a bedroom suite that meant a lot to her.  Volunteers were able to move it out of the trailer, but it is uncertain whether she will be able to salvage it.  She was on her bed in the cabin praying for many hours until the waters started to recede.  We heard stories from several families about standing in chest high water for 6 hours in their homes until finally the waters receded!  There were many stories of hours of prayer and renewed faith in God.

Volunteers spent many of the days mucking out crawlspaces and basement areas.  Lavern and other volunteers were working at the Lodge, as they call it, at the United Methodist Church.  The lodge was formerly used by SWAP and had some water in it from the flood.  The volunteers were redrywalling the bottom several feet in each room, muddling and painting.  This space is planned to house Storm Aid when they start up the project there.

When volunteers arrived at one house to muck out the basement and remove insulation between floor joists, they found many water leaks under the house that had made quite a mess and needed cleaned up and new plumbing repairs done.

In spite of everything, the resiliency, positive attitudes and gratitude that the victims of the flood conveyed was amazing!  Many, many words of thanks and appreciation for volunteers were heard daily!

Camp Nathanael was so accommodating to all of us volunteers!  Everything we needed or asked for was attended to in good time and they were so willing to share their spaces with us!  The food was delicious, and we always had more than enough!  Every one of the staff that we dealt with were so friendly and kind.

The week was busy and hot, but we were so grateful for all the volunteers who were willing to literally “dig into” this muddy, dirty work! 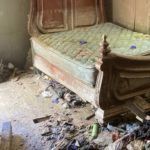 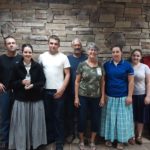 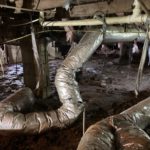 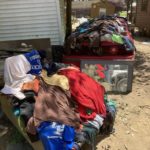