We had two separate groups of volunteers this week. Four individuals came from Pennsylvania, Maryland, and Kansas City and stayed at our project base at Camp Nathanael. Four young Amish men from Pennsylvania came through Storm Aid and were lodged at the Hindman United Methodist Church. Additionally, we had a couple who live nearby who volunteered part of the week. This was a week of transition for some of our long-term volunteers: Mark Epp and Cathy Wismer, from Nebraska, arrived on Wednesday for transition time with the departing project leader Fred Hershey, who left at the end of the week. Erma Wenger completed her two-week assignment as assistant cook.

Volunteers continued to work at Sylvia’s house, hooking up the kitchen sink, installing paneling, trim, and baseboard, and hanging a folding door. They completed the work that MDS agreed to do on her home and presented her with a prayer shawl that an earlier volunteer group had brought. The Storm Aid group began work at Mike’s house, where they put down sheeting for flooring, insulated exterior walls, and hung drywall. When that work was complete, they joined the daily volunteers who were mucking out the house next door, which belongs to Mike’s daughter Rebecca and her husband, who have five children. Together they were able to complete the muck out of the first floor and basement. A highlight for this group was a delicious lunch that Rebecca prepared and brought for the volunteers to enjoy one day.

Volunteers completed the final work at the Hindman United Methodist Church. They also returned to the home of Tammy, where previous volunteer had helped remove some appliances that were damaged by flood water. With the help of some Camp Emmanuel volunteers, they raised her small log home and moved it back onto its piers since it had slid off during the flood. 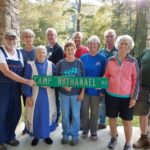 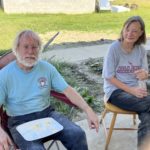