Six weekly volunteers, four from Ontario, Canada, one from Pennsylvania and one from Michigan, arrived Sunday evening to join the long-term crew of five. In addition, the cook’s sister came for a few days and utilized her painting skills. (If you can ice a cake, you can paint!)

The beginning of the week, the team worked on several homes. The group sanded and put in baseboard at house #1. They did sanding, priming and painting at house #2, and worked on drywalling and floor installation at house #10. What a surprise when they pulled out old flooring and found a kitten nestled on top of the floor joist! The cabinets for house #1 were ordered and arrived the end of the week. On Wednesday and Thursday, several of the men installed roof rafters on a house on top of Mountain View Road. The journey up the steep mountain road to the house itself was quite an adventure! Thursday, a group sponsored by Bethel Camp arrived and worked with us to finish the painting and install flooring at house #2. One of the men completed the electrical work there. The crews also began work at house #9, hanging sheetrock and finishing in two rooms and putting up wainscoting in the bathroom. The children in the Bethel Camp group added spice to our days. They worked hard helping to paint and gather up debris, as well as cleaning, organizing and raking leaves at the camp.

We had a visit from the regional operations coordinator, Darin Bontrager on Thursday. We appreciated his wisdom and expertise as he visited project sites and consulted with the MDS and local leadership in the area.

Submitted by the eastern Kentucky team 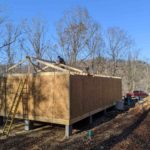 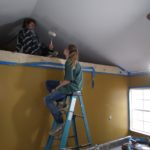 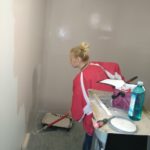