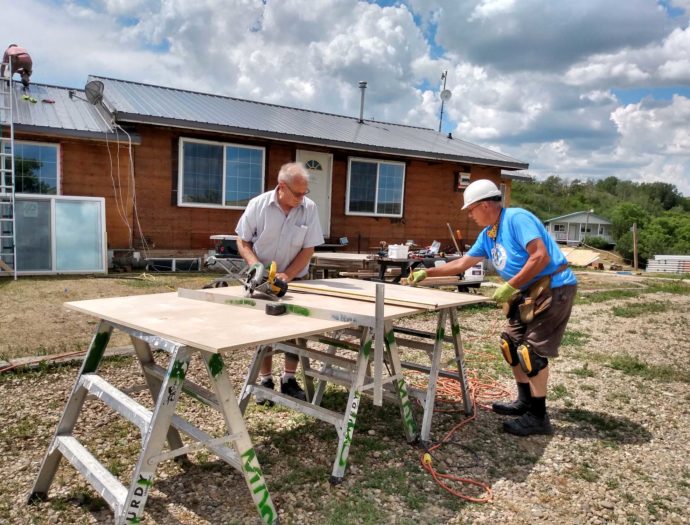 “They showed up with a servant attitude and posture, always asking what they could do for us, how they could serve us,” he said. “It was phenomenal. They had such servant hearts.”

Organized by MDS Saskatchewan, volunteers came to the camp, located north of Swift Current, from that province and Alberta and Manitoba in July.

The combined office and home for the director and the director’s family at the camp, which is supported by Mennonite Brethren congregations and other churches in southern Saskatchewan, was in poor condition and in need of repair, said Henry Schmitt, Chair of MDS Saskatchewan.

“It needed new siding, a new roof, soffits, fascia, windows, doors and insulation, among other things,” he said.

The home, he added, wasn’t up to “comfortable living” in all four seasons on the prairies, including cracks that let the cold winter winds blow into the home.

“They showed up with a servant attitude and posture, always asking what they could do for us, how they could serve us. It was phenomenal. They had such servant hearts.”

Over the month there the volunteers did repairs and renovations, all the time following health and safety protocols to keep people safe during the pandemic.

“For us, it was a way to support the mission of the camp, using the skills God has given us through MDS,” Schmitt said.

Total cost of materials for the work was about $40,000 CAD/$31,600 U.S., with the camp paying half and MDS providing the remainder of the funds.

For Penner and his family, including three teenage daughters, the improvements have made the house, built in the 1950s or 1960s and which doubles as his office in winter, “more liveable.”

“So many upgrades were needed,” he added, noting the volunteers also made many small changes that have made the house more comfortable.

“It’s so much easier for us to function as a family in the house now.”