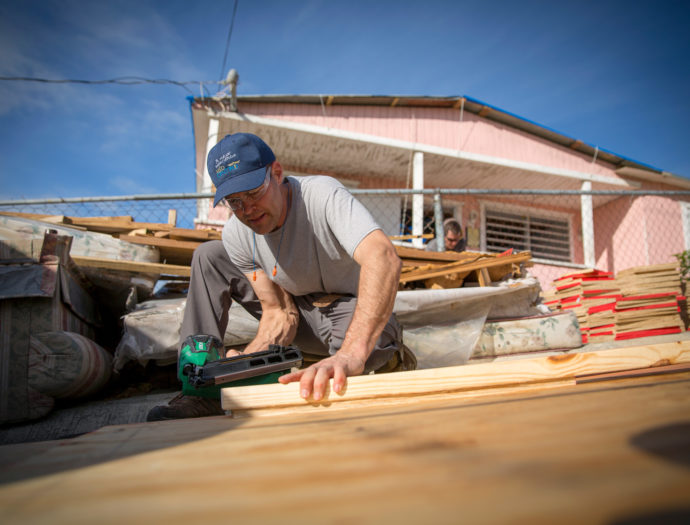 That flight was canceled on Sunday the day before. He rebooked for Tuesday morning.

That flight was canceled. Finally, he made it on Wednesday.

His is not an unusual story as hundreds, thousands of people are attempting go to and come from Puerto Rico in the aftermath of Hurricane Maria which devastated the island.

Communication has been spotty as cell towers were toppled by the storm. Electricity continues to be out for most of the country. Water and food are in short supply. People are waiting hours in lines for gasoline.

Only Wednesday were commercial flights landing in San Juan, although some humanitarian flights were said to have arrived earlier. The situation more than a week after the hurricane is from desperate to a crisis.

“The purpose of Larry’s visit is to connect with our MDS Puerto Rico Unit and their churches to begin assessing the damage and where MDS will respond,” Kevin King, MDS executive director said on Tuesday. “We will be responding, we will be rebuilding, but we just can’t say where and when until we can get there and conduct an assessment.”

When in Puerto Rico, Stoner is expected to quickly focus on the town of Aibonito and the surrounding area in the center of the country where the MDS PR Unit headquarters are located. He learned on Tuesday that the unit leader, Eileen Rolon, lost the roof on her house.

It is also the area where there is a Mennonite school and hospital. Stoner learned from a contact in San Juan who finally reached him by phone Monday and Tuesday morning that the fourth floor of the hospital in Aibonito has been badly damaged.

“The purpose of Larry’s visit is to connect with our MDS Puerto Rico Unit and their churches to begin assessing the damage and where MDS will respond.”

King heard from a Mennonite pastor in Hatillo, PR that the front of their church and roof are gone.

Pastor Hector Lugo told King that “in all my years of living in Puerto Rico I have not seen worse conditions. The water supply is intermittent. No electricity.” He also said he waited in line for eight hours for a gallon of gasoline.

Lugo told King that he was hoping to get out to visit his congregation members, but can’t without gas. “The roads are opening up but there is massive destruction everywhere,” he said to King.

King assured Lugo that churches throughout the Anabaptist community will be holding them and their congregants up in prayer.

King hopes to be in Puerto Rico next Tuesday, October 3, along with MDS Region 1 board chair Phil Troyer and Elizabeth Soto, a professor at Lancaster Theological Seminary in Lancaster, Pa. who is originally from Puerto Rico and has family there.

MDS is accepting financial donations for the Hurricane Maria response. Persons wanting to add volunteer for Puerto Rico should go online to register.