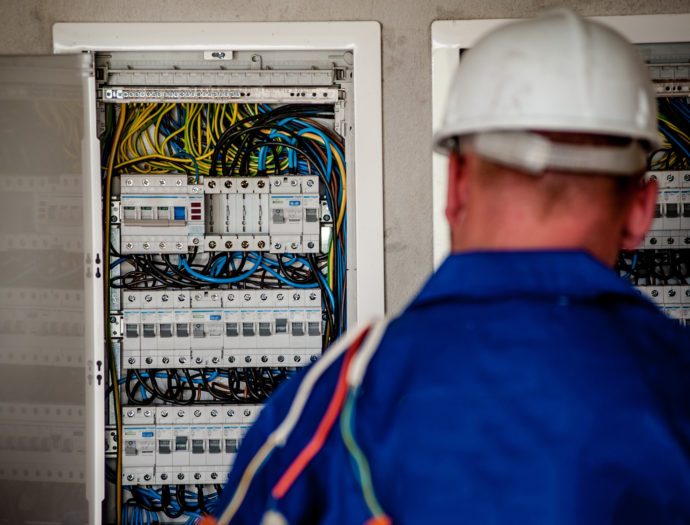 Ponce, Puerto Rico — After he graduated from high school in Ponce, Puerto Rico, Rolando Flores trained as an electrician. He wired circuits, transformed power, illuminated the dark, kept energy flowing—all without letting too many sparks fly!

His multimeter packed away, Flores now plies these skills in several other roles: as a pastor, husband and father, mediator and peacemaker, and more recently as Mennonite Disaster Service’s coordinator of Hurricane Maria relief and rebuilding on the island.

One recent Sunday in San Juan’s Summit Hills Mennonite Church, Flores urged each member to be authentic, true to him- or herself, even if it means standing up to injustice and societal pressure.

“Who wants to be a mere copy of an original?” he asked in the worship service celebrating the eleventh-graders of the adjoining Mennonite Academy, which teaches 400 students from preschool through grade 12.

Flores’ wife, Glorimar Mojica, belted out hymns of praise while daughters Glorianne, 17, and Katherine, 15, rocked keyboards and drums. Each family member fulfills unique roles, but Flores considers each a key part of his ministerial team. As such, all four fast Sunday mornings throughout January as a spiritual practice, asking God’s guidance for the year to come.

They know they face heavy challenges in 2018 as church and community members struggle to regain economic and emotional health after the tenth most potent Atlantic hurricane on record walloped the island last September.

Flores may not need to ratchet socket wrenches, but he’ll again create robust circuits—wiring together those needing help with those able to offer help from Puerto Rico’s Mennonite churches and MDS crews from the States and Canada. He’ll be wrapped up in issues of permits and transporting tools and materials from site to site. MDS in Puerto Rico hopes to keep two crews at work continuously at two different locations.

“It’s easier to repair a house than a mind or a heart,” Flores said, stressing the importance of counseling and mediation—activities he most enjoys—in the bicultural, bilingual MDS response.

Rolando Flores in front of the church he pastors.

An official mediator for the Puerto Rican government, Rolando works both in courts and communities.  With a master’s in clinical social work from the Ana G. Méndez University, Flores has coordinated peace and justice education and outreach for Mennonite Central Committee East Coast for the past 14 years.

He doesn’t wait for community members to find his office, however. “We have to get out into the streets; that’s where the greatest promise and needs are. Doing so also follows Jesus’s example, the oldest model for ministry.”

As soon as Hurricane Maria calmed, Flores, his wife and daughters filled a Summit Hills Mennonite Church van with water, candles, food and other essentials and sought out those needing these materials. They visited all church members as well as students’ families.

Along the way they learned of other needs: feelings of powerlessness, despair and disregard. “I never would have gone to some of these marginalized communities if it hadn’t been for the hurricane. It exposed other needs,” Flores said.

Flores will be kept busy as a pastoral “electrician” for the next long while: bringing illumination to those mired in post-Maria trauma, hooking up circuits of healing and connection, and reigning in stray sparks.

“Many people are asking why God allowed this disaster to happen to them,” Flores said. “My own faith has increased, however, because I feel God working with us. Everyday God gives us new opportunities.”

By Emily Wade Will for MDS