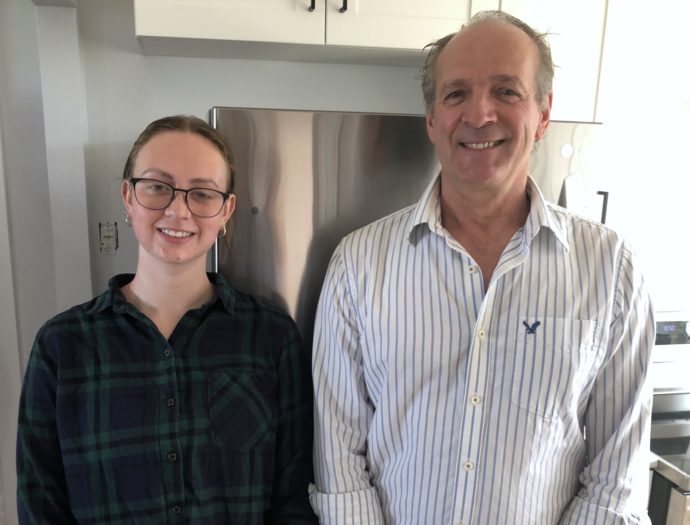 “We have a home to live in again”

When the evacuation order came, Michelle Swanson thought to herself: “Wow—this is really happening!”

Michelle, 21, who lives with her father, Ted, 60, in Arnold, didn’t expect the water to flood their home on that mid-November day in 2021.

Until that point, all the flooding was to the west in Sumas Prairie, the result of an unprecedented and catastrophic weather system that dumped as much as a month’s worth of rain on the area in 48 hours.

But then the Nooksack River in nearby Washington State overflowed its banks, sending water into Sumas Prairie—and into the Swanson’s home.

They left about 4 p.m., grabbing what they could. “All our cherished belongings were lost,” he said. “We were lucky to save a few things.”

When the water receded, he took a couple weeks off work to clean out his house.

“That’s some of the hardest work I’ve ever done,” he said, adding he was grateful for some local residents who provided assistance.

What worried him the most was how Michelle was taking it.

“She was strong,” he said of his daughter, who recently graduated from studying social work. “I’m proud of her. She lost all her things, too.”

“As I checked in town to see who needed help, people asked me, ‘what about Ted?’” said Mark Rempel, part of the MDS B.C. Unit.

“Right from the first meeting, it was agreeable between us,” he said. “We trusted each other.”

On September 10, as he signed the job card to finalize the end the repairs to his house, “I feel good,” Ted said.

It was tempting to dwell on the past, he added, but “it’s not healthy to grieve over the things we lost. The most important thing is we have a home to live in again.”