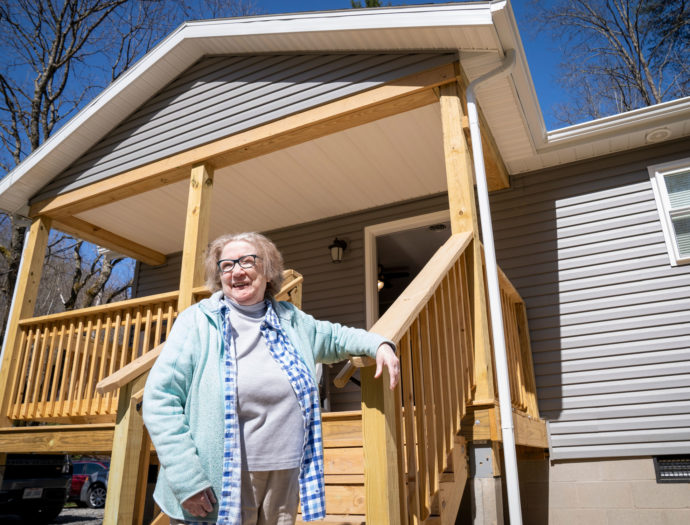 Two 1,000-square-foot modular homes built over the winter by volunteers in Strasburg, Ohio were dedicated on March 20 in West Virginia by Mennonite Disaster Service (MDS) and Disaster Aid Ohio.

The homes were built by volunteers working in small groups in a 30,000-square-foot warehouse in Strasburg, Ohio, over 200 miles/321 kilometres from  the mountain communities where the dedications took place.

While in the warehouse, the volunteers could socially distance, wear masks and open the large doors for ventilation.

When the volunteers in Strasburg, Ohio, finished the homes, they removed the front wall of the warehouse, took out the houses, then put the warehouse wall back up.

The homes were then hauled in large pieces to West Virginia, where construction was finished for homeowners  Lynn Sheer and Billie Paxton, both of whom have been waiting nearly five years since a severe flood in June 2016 devastated the area.

The effort was named the “Adaptive Housing Project” because volunteers were able to serve as safely as possible amid the COVID-19 pandemic, even though larger MDS projects were closed.

The Adaptive Housing Project was successful, in part, because MDS and Disaster Aid Ohio cultivated partnerships with other groups, including West Virginia Voluntary Organizations Active in Disaster, RISE West Virginia, and the West Virginia Conference of the United Methodist Church.

As Sheer stood in front of her new home in Chloe, W.V., she said, “I’ve figured out that there were 300 volunteers who worked on this home,” said Sheer. “To me, that’s 600 hands of love.”

Sheer, in her 70s, vividly remembers the day when floodwaters began inundating Chloe, home to about 1,000 people.

“I was volunteering in the food pantry at my church. When the power went out, we were working with candles and flashlights,” she said.

Her church, the Risen Lord Catholic Church, one of the only buildings still standing after the flood, later became a headquarters for emergency response.

Sheer’s home was all but washed away. She went to live with her sister, and she quietly navigated a long-term recovery that stretched from months into years.

During the dedication, Sheer greeted a small group of volunteers who traveled from throughout the region to rejoice and pray with her. “I appreciate every single one of you,” she said. “You’ll remain in my heart, probably for the rest of my life.”

Volunteers also dedicated a newly-built home for Paxton in Clendenin, W.V. Her house had withstood storms for nearly 50 years before the 2016 flood destroyed it. “You are precious,” she said to the volunteers. “I just love you to pieces.”

MDS and Disaster Aid Ohio volunteers have shown the joy of giving to others, Paxton added.

“The greatest joy you have is when you give to somebody else. Even if you just give someone a smile, that might be the only smile they have that day.”

Speaking at the dedication of Sheer’s home, MDS Executive Director Kevin King said: “This is truly a house that God built,” he said. “In the midst of a worldwide pandemic, love can still break through.”

To work safely during COVID-19, many groups had to work together, sometimes in new ways.

“It’s amazing what can happen if we all work together and nobody is worried about who gets the credit for it,” said Altlee Kaufman, a board member from Disaster Aid Ohio. “We have to remember that none of us are as good as all of us.”