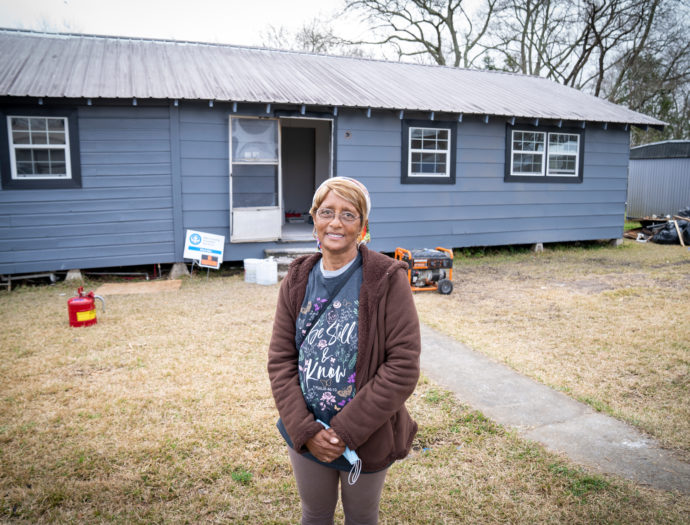 Things are looking up in Jennings, Louisiana

“Look at that!” exclaimed Indira Francis, who stood with a big smile on her face in her front yard in Jennings, Louisiana.

Francis was doing something she never thought she’d do again in her lifetime: picking a paint color for her freshly repaired home.

With a flourish, she fanned out a set of blue paint sample strips. She selected two—aptly named “Bright Future” and “Vibrant Horizon”—for Mennonite Disaster Service (MDS) volunteers to use when they paint the interior of the home. 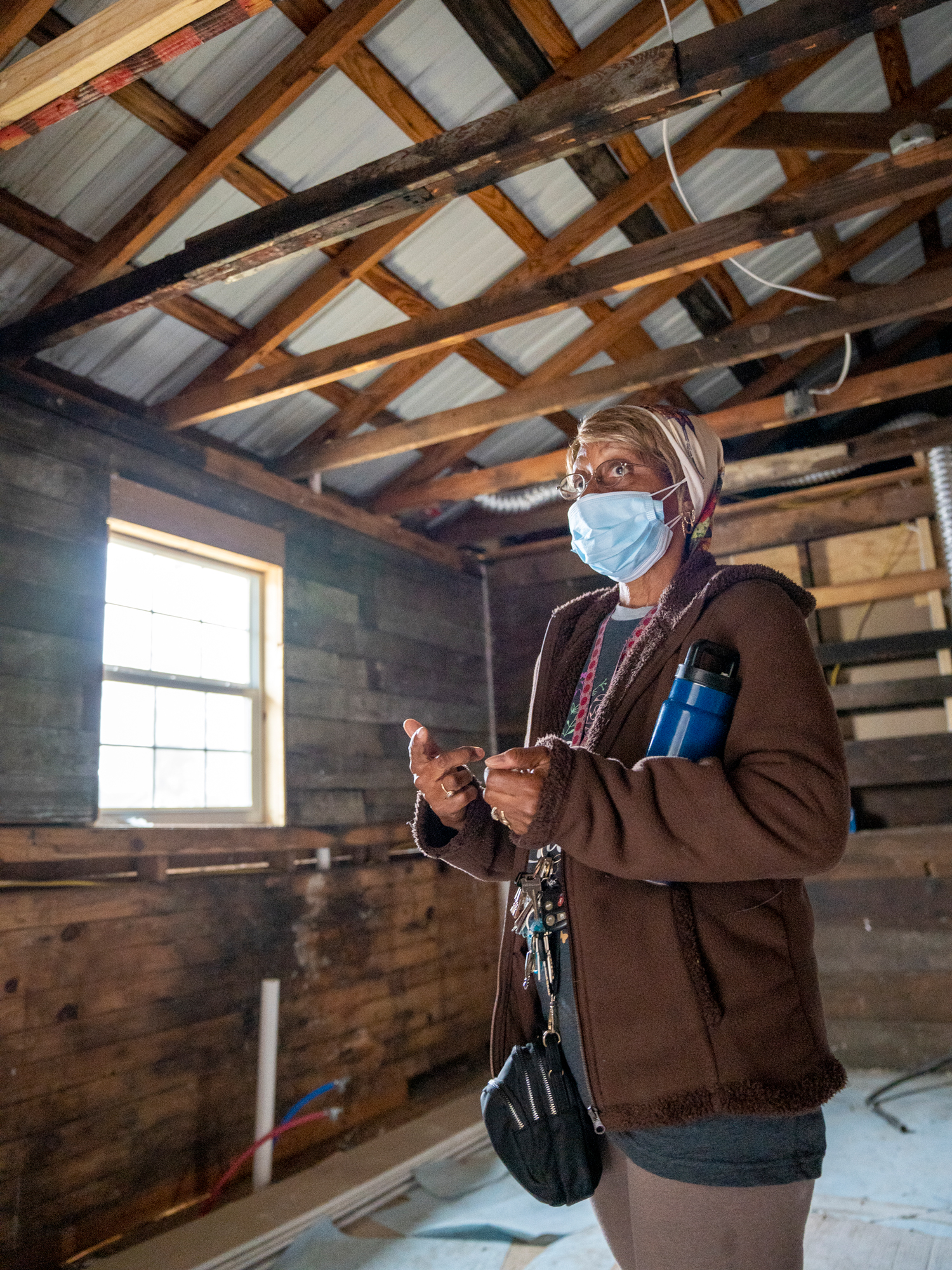 Like so many others in Jennings, Francis has faced a long road to recovery from hurricanes Delta and Laura in 2020, followed by an ice storm. A kitchen fire last year compounded the damage.

But in February, evidence of these multiple disasters was disappearing as volunteers mudded and drywalled, sometimes pausing to listen to Francis’s stories.

For Francis, who grew up in Jennings, her home holds a lifetime of memories—especially ones with her mother, who passed away in 2014.

“She named me for Indira Ghandi,” said Francis. “She also took us to concerts—we saw Michael Jackson. We saw B.B. King.”

When she was 10 years old, her mother took her to see James Brown. “I’ll never forget that,” she said. “It was 2 a.m. on a Thursday night in Baton Rouge, and I got to hug James Brown in his fur coat.

“He looked at me and said, ‘You better be in school tomorrow.’

“And I was!” insisted Francis, drawing a laugh from the MDS volunteers. By the time they finish working in her home, the volunteers know what it was like to grow up in Jennings.

“It was a good place to grow up. I always worked two or three jobs,” said Francis. “But now, I’m retired. I’m almost 70. I visit my mother’s grave.”

When her home is finished, she plans to cook one of her favorite childhood meals: crab meat au gratin and twice-baked potatoes. “I can’t wait!” she exclaimed. “I mean, I can hardly sit still.”

A ten-minute drive away, in the small enclave of Roanoke on the outskirts of Jennings, another homeowner, Linda Johnson, said she feels like dancing, too.

MDS volunteers were installing a new roof and making other repairs on the home she shares with her 88-year-old mother.

“I thought we had somehow escaped the damage,” said Johnson, “but after the ice storm, water started dripping into all the rooms in the house. My mom is blind, and she has mobility issues.”

“It’s a blessing. I know people get stuff for free, but I never thought it would happen to me. I will forever be grateful to God—and to you all."

Johnson gently led her mother, Lucy, to the front porch so she could hear the volunteers at work. “It’s great,” said Lucy. “It’s a blessing. I know people get stuff for free, but I never thought it would happen to me.

“I will forever be grateful to God—and to you all,” Lucy said.

Johnson added that, when her neighbors saw an MDS sign in their yard, they perked up. “We are the sleepy little hollow outside of Jennings,” she said. “We were feeling like the forgotten community. But not anymore.”

After the long string of relentless disasters, MDS project coordinator Phil Helmuth said he sees expressions of hope starting to reappear on people’s faces in Jennings and nearby communities.

“People have hope because we’re here working,” he said. “They’ve had contractors come in and say, ‘We’ll take care of your roof.’ Then those contractors needed payment up front—and the homeowners never saw them again.” 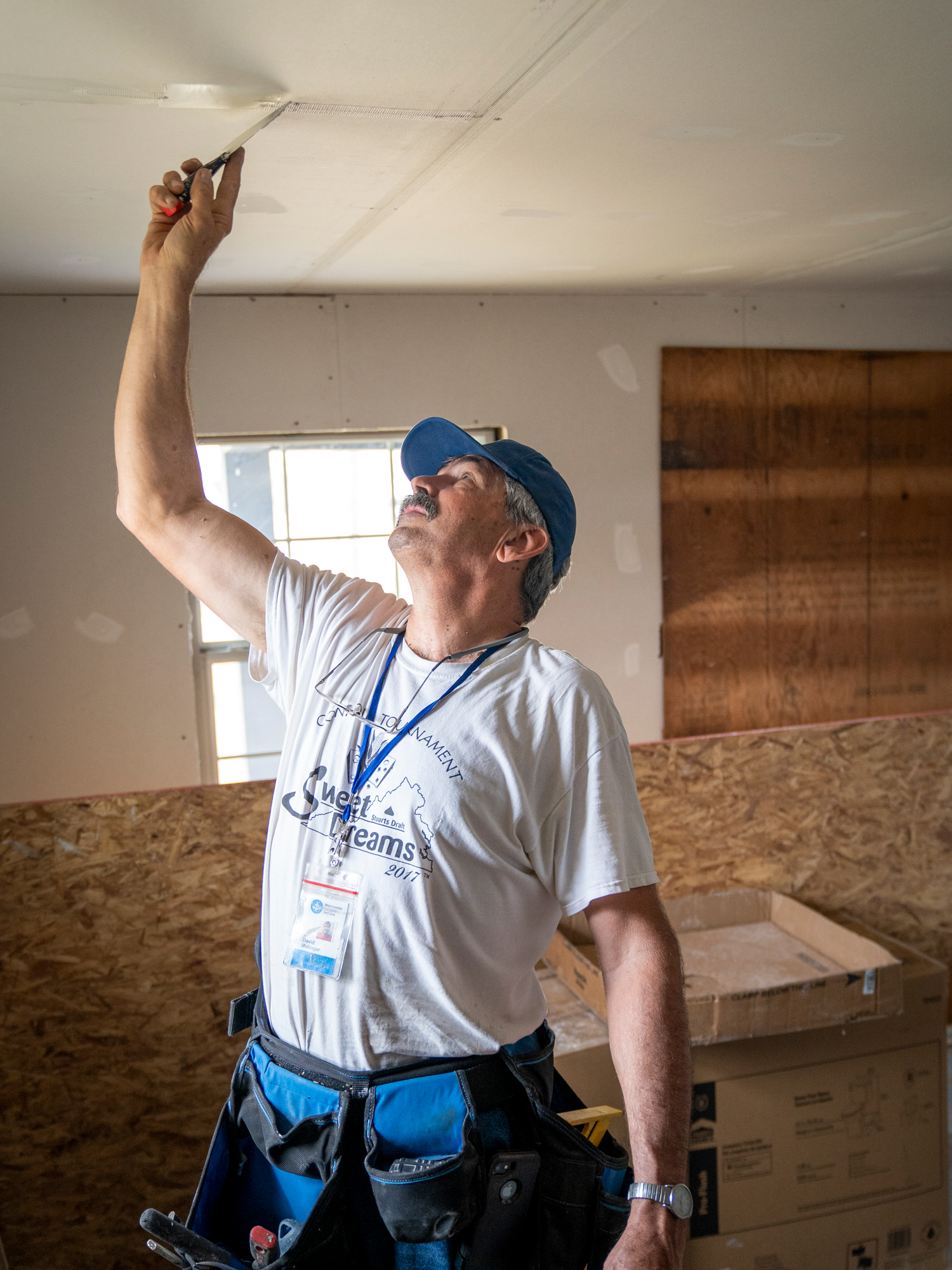 MDS Leadership volunter, David Mininger from Virginia at the home of Indira Francis.

“And each family is different,” reflected Doug Goertzen, an MDS crew leader. “Every story is different—and every story pulls at your heartstrings. They start off as clients, soon become friends, and then become family.”

As volunteers returned to the Jennings Church of Christ, where they ate their meals and stayed in bunk rooms, Rev. Roy Platt, pastor at the church, reminded them to leave a message on a special section of the wall.

“I want all ya’ll to put your name, a picture of yourself, a scripture right on up there,” said Platt. “We want to have a record of you being here.” 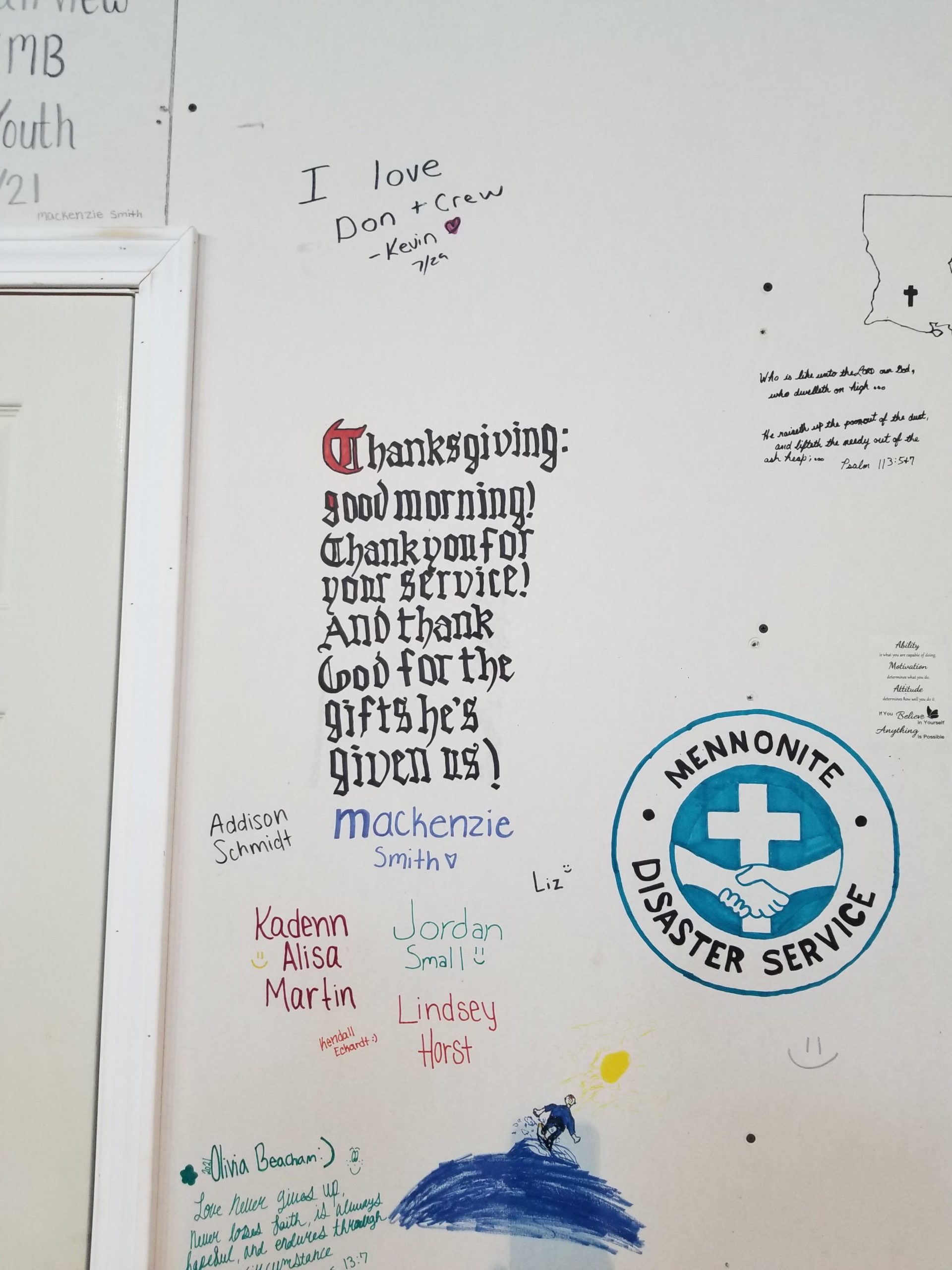 Eventually, the wall, decorated by hundreds of volunteers, will become a permanent wall within the church facility. “So your message will be toward the future—and it’s going to be there a long time,” said Platt. “I can’t thank you enough for ya’ll coming down here and doing what you’re doing.”