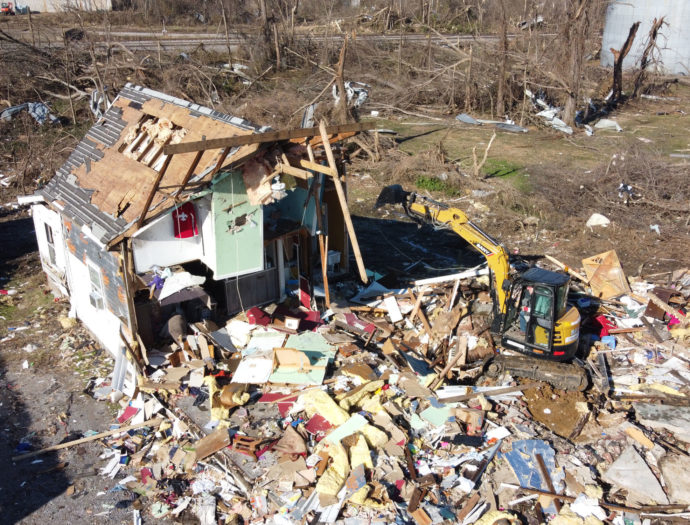 Nesler, who grew up in Mayfield and still lives there with her family, is helping to lead a new nonprofit called Homes and Hope for Kentucky, created to serve as the long-term disaster recovery organization helping tornado survivors in the town of about 10,000 people.

She is helped by Joe Orr, a retired Army veteran and also a Mayfield resident, who canvasses the community every day, walking miles up and down the streets to check on residents in need.

Orr is a friend of of Tom Crabtree, builder and architect of Hope Village, a community for flood survivors in White Sulphur Springs, West Virginia. And that’s where the MDS connection comes in: MDS volunteers provided the labor to build the homes in Hope Village.

So when Orr found himself on the phone speaking to Crabtree, he wondered aloud how to even begin tornado recovery in a town as devastated as Mayfield. That’s when Crabtree told Orr about MDS.

“I’ve never seen anything like this in my life,” he said.

He’s grateful that MDS volunteers are on the scene. Several days of heavy rain followed the tornadoes, further weakening structures and, particularly once the temperatures warm up, opening a breeding ground for mold.

“MDS is saving homeowners a lot of money by demolishing homes,” explained Orr. “I talked to one lady who spent $7,000 to get her home taken down.”

For Nesler, the connections that fell into place brought not only funding and support from people like Crabtree, but also from local bankers, county officials and concerned citizens.

“These connections that brought MDS to Mayfield—I believe they are God’s handiwork,” said Nesler.

“Mayfield is a very close-knit community,” she said, while describing her love for her hometown. “It’s a great place to raise your family.”

When she thinks about what she misses the most now after the disaster, it’s the daily routines—like walking downtown from where she works as an insurance broker, and picking up lunch at Carr’s Steakhouse, which was demolished by the storm.

“My daughter had her senior pictures taken in Mayfield’s downtown,” said Nesler.