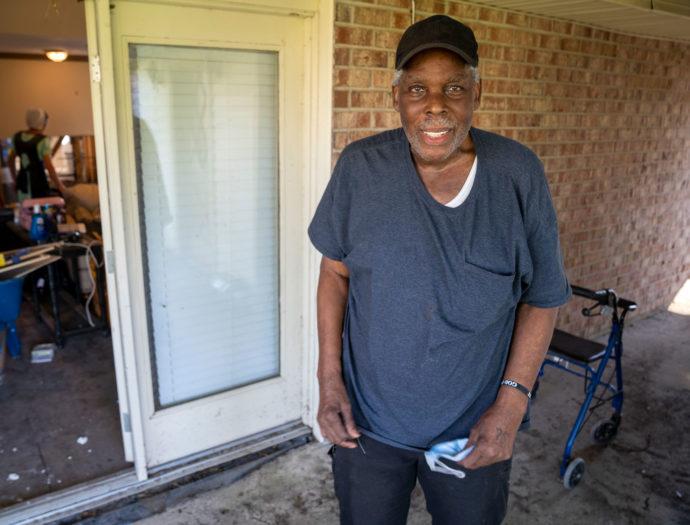 “Take care of each other”

Michael Bering paused in the shade on his back patio in LaPlace, Louisiana, chatting for a few minutes with his brother, Edward, who has come by to lend him some moral support as he copes with the havoc Hurricane Ida wreaked on his home.

Michael’s house—along with nearly every other on the quiet block—has wind and water damage, and black mold is beginning to make an unwelcome appearance wherever floodwater wicked into the drywall.

Young Mennonite Disaster Service (MDS) volunteers, from Lancaster, Pennsylvania, most of them 17 or 18 years old, are helping Michael gut the worst-damaged areas of the home.

He loves living in LaPlace, with his brothers and sister—all in their 60s—close by.

He’s only seen one other storm—Hurricane Isaac in 2012—that brought this level of damage.

Another group of MDS volunteers also helped Edward Bering, while a third Bering brother—Forell, the youngest and a pastor at the Bethlehem Baptist Church—has been busy connecting his family and community with MDS as he sorts out who needs help the most.

Since Ida hit, the three brothers have worked nonstop to help each other and their community. “My mother lived to be 101,” said Edward. “Before she died, she told us to take care of each other.”

Elvin Shirk, who is coordinating the work of MDS Early Response Teams in Louisiana, said he relies on local pastors like Forell Bering, as well as caseworkers from the local United Way, to refer MDS volunteers to the people most in need.

“I’d say we’ve gotten 40 percent of our work referred to us by Forell Bering,” said Shirk, who lives in Ephrata, Pennsylvania. Shirk has previously served as an MDS project coordinator in Panama City, Florida and Hattiesburg, Mississippi, among other places.

As hurricane recovery moves from early response and cleanup into long-term repairs and rebuilds, communities like LaPlace will most likely establish long-term recovery committees to organize future recovery.

For now, about six weeks after Ida struck the Louisiana Gulf Coast, volunteers aren’t yet repairing or rebuilding homes. They’re helping homeowners muck out, remove belongings that can’t be salvaged, and prevent mold—all vital steps on the road to long-term recovery.

In another Gulf Coast community, Luling, about a 20-minute drive from LaPlace, a second group of MDS volunteers worked in Brenda Isaac’s yard, removing a shed and a porch—both crushed by Ida—so that Isaac can safely get to into her damaged home and begin repairs.

Isaac and her granddaughter, Layliah Polly, a tenth-grader in high school, stop by to meet the volunteers, who have traveled from an Amish community just outside Lancaster, Pennsylvania.

Polly’s face lights up: “The yard, I can see the yard now!” she exclaimed.

“It’s exciting to see some normalcy,” she added—a feeling that’s been hard to come by, since her ninth-grade school year was disrupted by the COVID-19 pandemic and, just as schools reopened in 2021, Hurricane Ida shut them down again.

After dragging heavy wooden pieces of the porch out to the road, volunteer Nathan Dienner said he enjoys seeing that kind of excitement on people’s faces as he helps them.

But, Dienner added, he was surprised by the extent of the hurricane damage. “I really didn’t know it would be this bad—so much ruined,” he said.

Volunteer Alvin Glick agreed that the widespread damage was a surprise: piles of debris line every road, and blue tarps cover nearly every roof in Luling.

“There was a lot more damage than I thought there would be,” he said. “It’s amazing to me that some people can pick up and rebuild.”

Another volunteer, Nathan King, said seeing the damage firsthand has inspired him to look into what it takes to become a long-term volunteer with MDS someday.

“I can’t imagine suffering through something like this,” he said. “My parents taught me to do this kind of volunteer work, and I’ve got some experience in roofing that could really help people down here.” 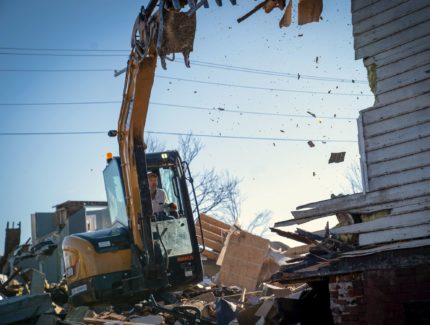