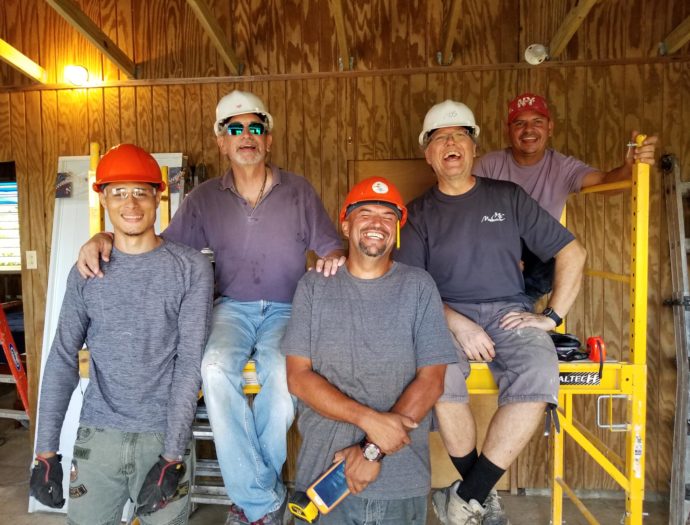 Serving together as a family: “God always sent a greater blessing our way”

Growing up in a farm family, Randy Short spent a week serving with Mennonite Disaster Service (MDS) in Kentucky after his senior year of high school. After that, he served with MDS each winter for three or four months.

“After we were married, it just seemed the natural thing to do in wintertime was a service project,” said Deb Short, recalling how it wasn’t unusual for she and Randy to have a toddler (or two), be expecting another baby, and still pack up and spend anywhere from two weeks to three months away from home.

“We did miss a couple years when our oldest of seven started to school,” she added.  “But when we decided to homeschool, we just took our books along and usually had a cultural study of the area we went into.”

Three of the Short children—Joel, 20, Jonathan, 27, and Rebekah, 24, are now carrying on their parent’s tradition of serving as long-term MDS volunteers. Along with their parents, they share valued memories of lasting friendships and insight on the rewards of serving together as a family.

“We thank our Heavenly Father for leading us and bringing these blessings into our path,” said Deb. “We give Him the glory.”

Joel’s first recollection of going to an MDS project was when he was three years old, traveling to North Fork, West Virginia with his parents. His goal as he grew older was to get to know local residents, be a part of rebuilding their lives, and be a blessing to them. “Instead, they have blessed my life,” he said.

Jonathan, who knows his family excursions started long before he was born, reflected that he grew up seeing how God works through people to help others in difficult circumstances.

“As I reflect on my early memories they are faint and vague, but as the years keep rolling they become stronger and more special,” he said.

This included the winter of 1999, when his family was serving on an MDS project in Birmingham, Alabama. A vivid scene from that experience stands out in Jonathan’s mind.

He accompanied his father to a job and was shown a house where a man lived before he received a new home. “It made an impression on me as a young boy of how this man lived with so little,” said Jonathan.

He also remembers being in the tool trailer, taking hikes to the railroad tracks, and playing along the creek. “Another special memory was readying storybooks about the culture in the South,” he said. “Now that I am older I understand that it was not easy to pack up our family and leave for a month.”

Rebekah, who has been a long-term volunteer with MDS in the past two years as an assistant cook in West Virginia and Texas, said she found long-term volunteering fun but challenging. “The blessings can still outweigh the struggles though,” she said.

Growing up traveling with her family to volunteer was always rewarding and fun, too, she recalled.

“Going long term, I feel, allows you to build relationships in the community,” she said. “It always seemed like even though we went somewhere to allow God to bless others through our lives, God always sent a greater blessing our way.”

Rebekah encourages other families to volunteer together.

“Now, as an adult, it’s fun to see young children come with their parents,” she said. “They add a different dimension to the group and they seem to be good ice breakers. If someone is willing to help and show them how to do something they can feel like they’re contributing to the project as well.”