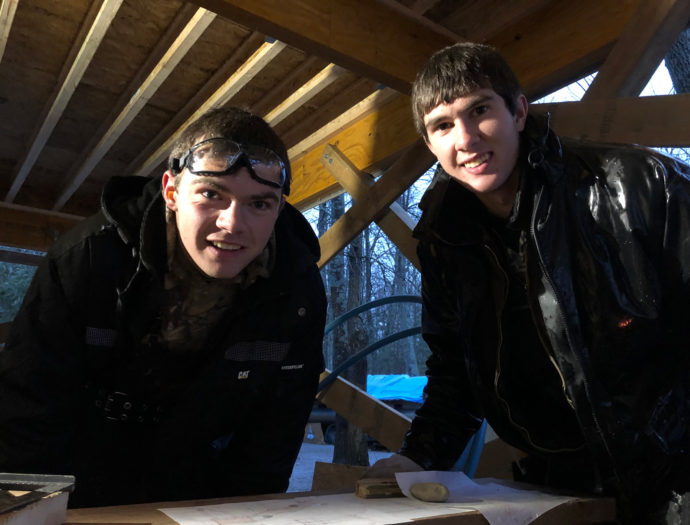 Service in Canada a “way to help in our own backyard”

“Those areas get lots of hurricanes, floods, earthquakes and tornadoes,” he says. “It’s in the news a lot.”

But disasters happen in Canada, too, and MDS is increasingly being called on to help.

Since 2013, when flooding hit High River, Alberta, the organization has responded to major disasters such as wildfires in Fort McMurray in 2016 and Williams Lake, B.C. in 2017, and to flooding in Grand Forks, B.C. in 2018.

In Ontario, MDS has responded to two floods and a tornado in the Ottawa region in the past three years.

Currently, the organization is working on six houses damaged by 2019 spring floods in Renfrew County, just over an hour west of the capital. (See Ontario widow “eternally grateful” for MDS volunteers.)

“Each year there seems to be more places in Canada that want our help,” he says, noting that MDS also responds to smaller needs in other provinces, too.

One of the reasons for the increased activity is MDS’s positive reputation among disaster recovery officials across the country.

“MDS is becoming more well-known across Canada because of its work,” says Hamm. “This means there are more calls for us to be involved.”

Most of those volunteers in Ontario came from the Orthodox Mennonite, Waterloo-Markham Mennonite, Old Order Mennonite and Amish communities, Hamm notes.

“Those people really stepped up,” he says.

It also included people like Kevin and Evelyn Greenwood of Kingsville, Ont.

The couple, members of the Leamington Mennonite Church, has done MDS service in the U.S. eight times.

This time around, they decided to stay closer to home when they volunteered for a week in Renfrew County near Ottawa in November.

“MDS brings to the table something no other organization does."

“We always set time aside to do MDS,” says Evelyn, retired from a career of working with seniors. “This time we decided to do it in Canada.”

“It felt good to respond to a need closer to home,” adds Kevin, a retired teacher, adding it was also a plus not to have to travel so far.

A big difference was the weather—it was colder. “But we survived,” says Kevin of their outside work on two houses.

“It was nice to do service in that area,” says Bless, who has also volunteered with MDS in the U.S.

“There are lots of people there in dire straits, too. Without our work, they’d fall through the cracks.”

“We couldn’t do this without MDS,” says Bonny Johnson. “MDS brought the right people for the job.”

“MDS brings to the table something no other organization does,” adds Neil Nicholson of how the organization rebuilds and repairs damaged houses.

“It really takes a load off of homeowners and provides them with peace of mind.”

For Vince Gervais, the Christian aspect of MDS’s help “jumps out at me. Every time we ran into a challenge, things came together. That was the Holy Spirit at work.”

As he looks ahead to 2020, Hamm is hoping more people in the province will sign up to help those whose homes were damaged by flooding in Renfrew County in 2019.

“For people in Ontario, this is a great opportunity to serve close to home,” he says of the work that will be done on six homes in the county.

“It’s a privilege to come alongside people who lost everything and give them back not only their houses, but also their hope.”

Best of all, he says, people in Ontario “can do service right here in our own backyard.”