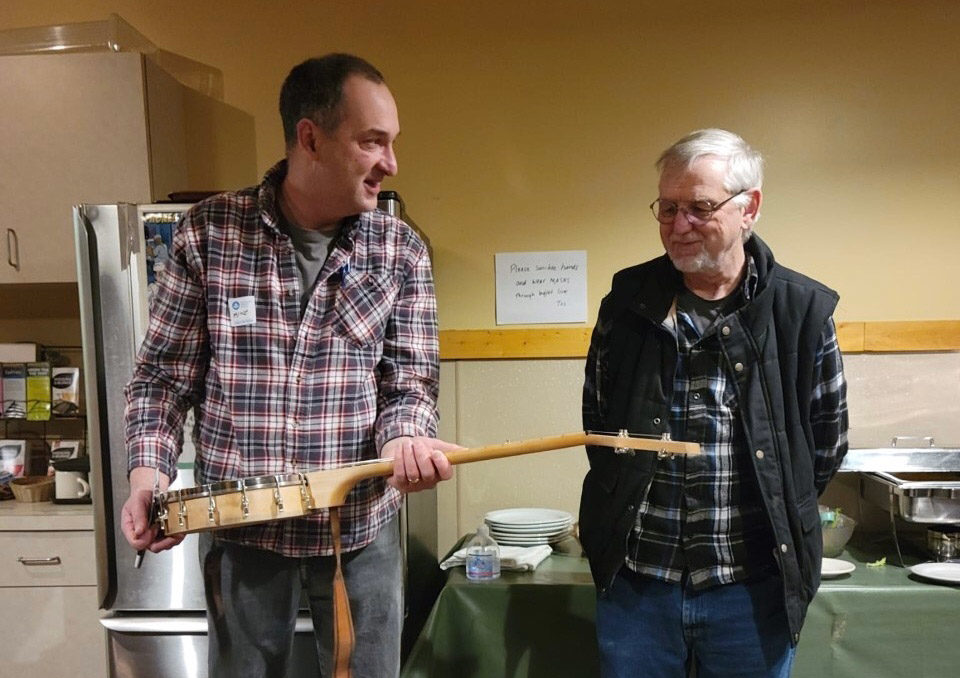 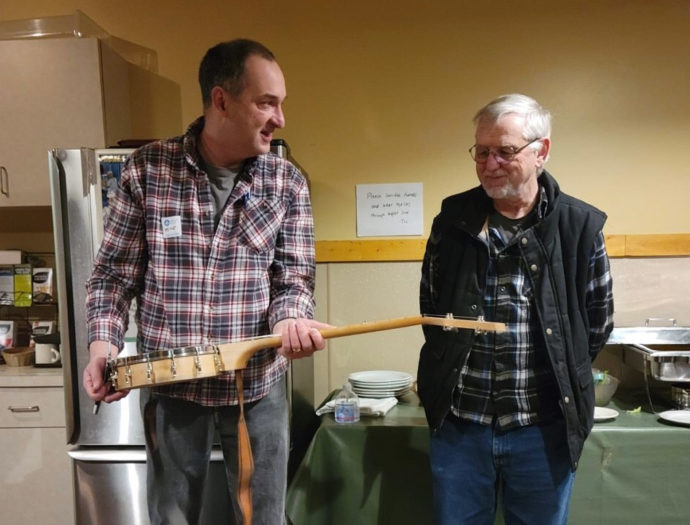 Princeton musician gets his banjo back with help from MDS Canada

“I didn’t have any hope it could be played again,” said flood survivor

Wesley Emmelot and his wife, Maureen Parsley, lost almost everything when the Tulameen River overflowed its banks in the town of Princeton, B.C. in mid-November 2021.

“There was a foot of water in the house, and the basement was filled with water and mud,” Emmelot said.

Parsley, who works for Princeton’s emergency support services, was at work when her husband evacuated their home.

Emmelot could only take a few things when he waded out the door. Among the things the 66-year-old left behind were his prized instruments—accordion, ukulele, guitar and banjo.

“I play on the music team at my church, and for people in a local personal care home,” said the amateur musician.

When Emmelot got back home after the flood, he found all the instruments had survived—except the banjo.

“It didn’t look salvageable,” he said of how it was waterlogged and stained. “I didn’t have any hope it could be played again.”

Davis, an MDS Canada volunteer from Trail, B.C., was in Princeton in January mucking out the couple’s house.

When Davis first saw the banjo, it was standing in the corner of a bedroom on wet carpet.

“Wesley told me it was most likely done and might only be good for parts,” he said. “Little did he know I have a friend who repairs guitars.”

Davis told Emmelot that his friend, Dallas Fletcher, could do amazing things with damaged string instruments.

“Let me ask him to give it a try,” he told Emmelot.

Emmelot wasn’t convinced it would work. But he agreed.

When his week of volunteering was done, Davis took the banjo home and showed it to Fletcher —who felt it could be restored to playing condition.

“Repairing stringed instruments is a hobby of mine,” said Fletcher, who is retired and goes to Trail Alliance Church with Davis.

It wasn’t easy; the water had caused the glue holding the neck to the body to become soft, with the result the pieces were separating.

Fletcher clamped and glued it back together and made other repairs. He also removed most of the stains.

“Not all of them,” he said, noting some stains wouldn’t come off. “Now it has history and character, and a story to tell.”

“Little did he know I have a friend who repairs guitars.”

A bonus for Fletcher was this was a way he could do something for MDS—a bad back and arthritis prevents him from volunteering to serve at a project.

“It’s something I could do to help someone hit by a disaster,” he said.

On February 16, Davis presented the restored banjo to Emmelot—who was surprised to get it back in playing condition. 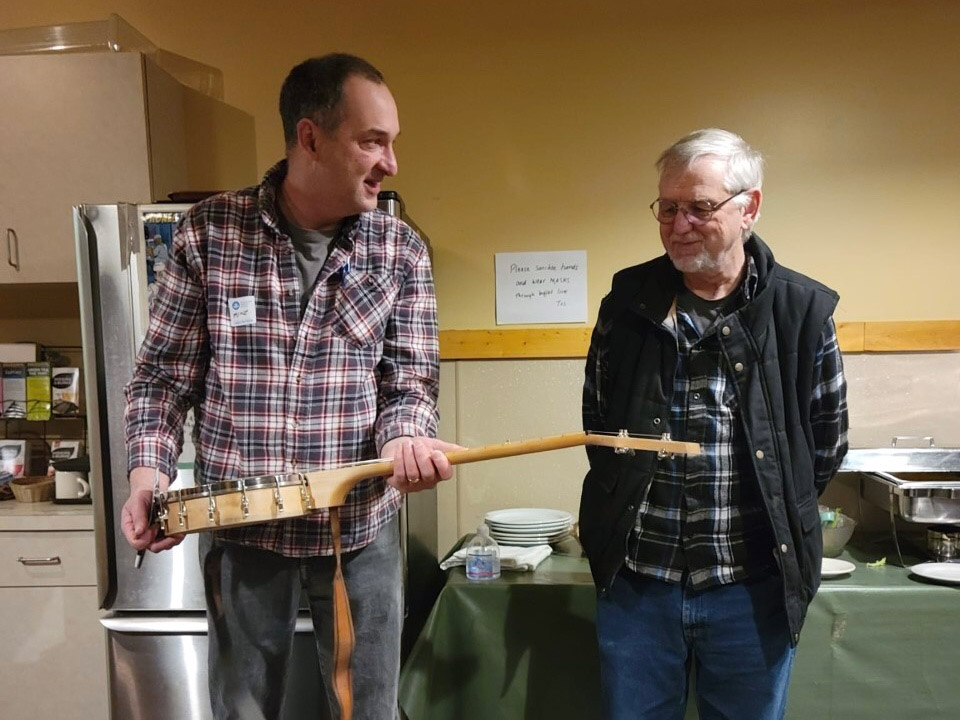 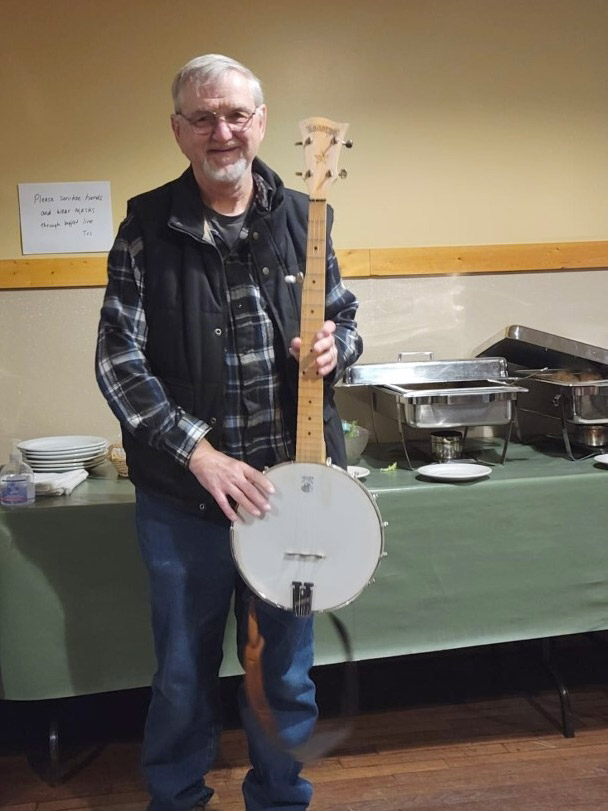 Wesely Emmelot with his repaired banjo.

“I’m very thankful for what Dallas and Mike did,” Emmelot said, adding that if there is an event to celebrate the completion of MDS’s work in Princeton, “I can play my banjo.”

In the meantime, he is looking forward to playing it again at his church, New Hope Christian Fellowship, a Pentecostal congregation, and at the personal care home—once pandemic restrictions are lifted.

As for his house, MDS volunteers have cleaned out the mud from the basement, put in a new subfloor and are putting up new walls—the furnace, hot water tank and electrical panel have been relocated upstairs to keep them safe from any future flooding.

“There’s a way to go yet, but it’s coming along,” said Emmelot. “I’m very thankful for all the help we’ve received, and for making so many new friends from MDS. I don’t know what we would have done if MDS hadn’t shown up.”

Since December, 93 MDS Canada volunteers from B.C., Alberta, Manitoba and Ontario have done work on 43 houses in Princeton, doing clean out and repair; nine of the houses are complete rebuilds.

And they also fixed one banjo.

More volunteers are needed for flood response in B.C.; go to www.mds.org for more information or to volunteer.

Recovery work in Princeton and the Fraser Valley is being done jointly by MDS Canada and Mennonite Central Committee B.C., which have entered into a partnership agreement to respond to the floods that hit B.C. last November.