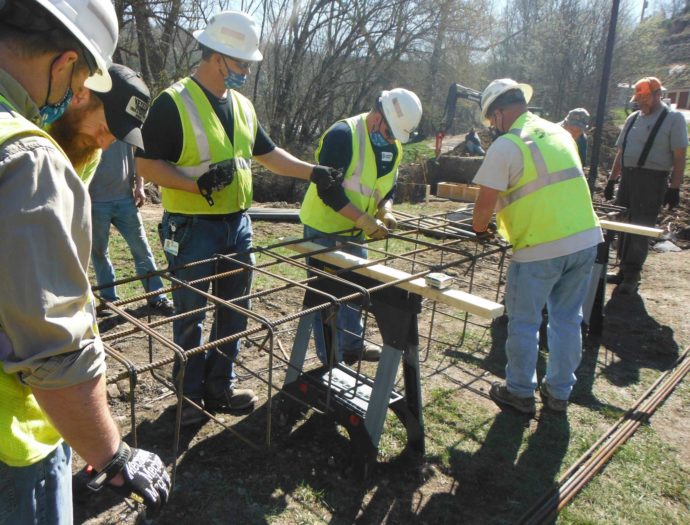 Work on the Philippi bridge in WV

It’s summertime in Philippi, West Virginia, and cars are driving over a beautiful new bridge, some of them with canoes on top, others with mountain bikes racked on the back. Hikers can pass across safely, too, because the wide, sturdy bridge has plenty of room.

Back then it was a nine-foot culvert that collapsed during a particularly heavy rainfall. The culvert crossing provided access not only to a key point in Philippi’s watershed, but also to a public boat ramp that serves as a river rescue site.

It also provides access to some of Philippi’s 41 trails covering 329 miles for mountain bikers and hikers, and is located next to a park and the city’s historic covered bridge.

When the culvert, which also provides access to a private residence and two tracts of private property, washed out, hikers and mountain bikers simply went elsewhere, taking with them the economic boost they gave the community.

The culvert, placed by a private citizen around four decades ago, wasn’t claimed by any public entity. But the original owner’s son, who lives in Philippi, agreed to serve as the new owner of the bridge.

Some Philippi residents approached Lester Lind, a Mennonite Disaster Service (MDS) volunteer who has helped build three other bridges in West Virginia, about building a new bridge. Lind then met with city managers, and also brought in his longtime friend Dennis Fisher, a professional engineer who attends Philippi Mennonite Church with Lind.

“We had a neat partnership with his engineering expertise and my experience building other MDS bridges,” said Lind, who added that the community was really feeling the absence of the bridge.

“While it is a private bridge, it serves many people, and the need was high,” said Lind.

“We had a neat partnership with his engineering expertise and my experience building other MDS bridges."

Along the way, said Lind, the community gained trust and hope that the bridge would indeed become a reality. In fact, all the labor came from local volunteers.

And that’s just one example, he said. “Before I got a chance to call about a need, I’d hear: ‘You don’t need to call. They’re donating it!”

When it came time to order 40 tons/36.2 tonnes of crush run gravel, Lind was informed that both the gravel and the hauling were being donated.

“Local restaurants donated lunch for each day we worked on the bridge,” he said. “This is representative of the community support around this project.”

Fisher was the first person to drive across the bridge.

“It was a good feeling,” he said. “Both Lester and I put a lot of effort into it, and it’s the first time we’ve done anything of this magnitude.”